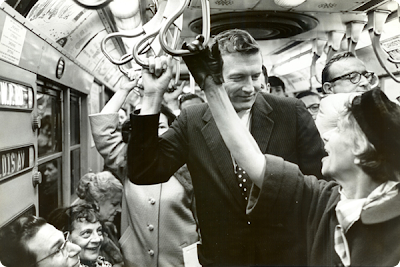 Lindsay's creation of the Urban Design Group brought in dynamic young planners to look at open spaces and zoning as a way to preserve and enhance city life.

He strengthened Community Boards to give them power to review neighborhood land use issues before a decision could be made by the City Planning Commission or forwarded to the City Council for final approval.

The urban gem that is today's SOHO is a result of the Lindsay administration's work to preserve the old industrial structures and allow them the right to be adapted for residential, artist loft and other modern urban uses.

Lindsay lead a bicycle brigade to Central Park on a car-free Manhattan street -- decades before the New Urbanists and others have battled for bike lanes, wider sidewalks, better transit and other elements of the physical city unburdened from car dependency.

Though many New Yorkers labeled Lindsay as a failed dreamer, history should be much kinder in how it evaluates the soulful and energetic fighter for equality and livability.

Lindsay revolutionized urban planning and reminded us that urban cities -- even when they were on the verge of becoming unlivable from the mid 60s to mid 70s -- are places to be celebrated, enjoyed and energized.

For its fair examination of his triumphs as an unflinching urbanist -- especially to the benefit of the economically and politically disenfranchised -- America's Mayor: John V. Lindsay and the Reinvention of New York ($29.95 paperback) deserves hallowed space on the book shelf of anyone and everyone who cares about cities.

Wright is the author of 5,000 published articles on urban life, architecture, public policy, planning and design. He is active in working to make sure universal design, which provides barrier-free access to people with disabilities, is incorporated to the essential and rapidly-evolving practice of sustainability.

http://www.thirteen.org/lindsay/video/full-program/fun-city-revisited
Posted by Steve Wright Communications, Inc. at 1:24 AM