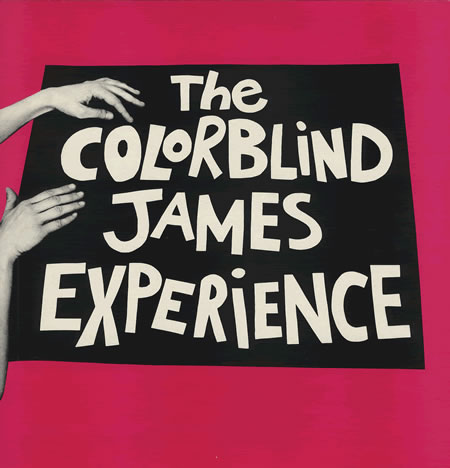 It was the culmination of a five-year quest, a long and winding road we’d traveled to meet our rock ‘n’ roll idol. Now we stood face to face with him, and he was inviting us to breakfast. Inviting us!

First, a flashback. It all started just after I got married in the summer of 1988. My husband and I have always shared an interest in eclectic, eccentric music. We used to spend hours combing the record shops around the Ohio State campus. When my husband got the pop music beat at the newspaper that summer, we were ecstatic.

Nearly every day, Steve brought home promo copies of vinyl and CDs: rock, pop, folk, blues, Top 40, indie artists – you name it.  More music than we could listen to in six months of Sundays. I never imagined I’d have so many albums that I’d have to triage them into categories: “gotta listen to it”, “maybe listen to it,” and “no freakin’ way.”

It was during a vinyl triage session that I found it. The cover art consisted solely of black and white letters on a magenta background, with a pair of hands reaching to touch the words: “The Colorblind James Experience.” I pulled the liner out and was immediately taken with wacky cartoon illustrations of songs titled: “Why'd the Boy Throw the Clock Out The Window,” “Walking My Camel Home,” “I’m Considering A Move To Memphis,” “Fledgling Circus” and “Dance Critters.”

From Side One/Track One, Steve and I were mesmerized. The music melded familiar styles like country, rockabilly, blues, gospel and polka but the songs were like nothing I’d ever heard before. It was as if Singing Brakeman Jimmie Rodgers, Kinky Friedman, Frankie Yankovic and Bob Dylan were at a party in Spike Jones’ tiki bar. The lyrics told strange tales of circus life intrigue, Wild West dance halls, desert mayhem and mistaken identity. Some songs made me laugh during one stanza, then fight back tears the next.

Over the next five years, we collected the band’s albums. They were too obscure to find in record stores, so we mail ordered them, sending checks to a guy named Chuck Cuminale in Rochester, NY.  At some point, Steve called a phone number listed in the band’s contact info to inquire about an album. A guy named Chuck answered. Without a doubt, he had the same voice as the band’s lead singer. That’s because Chuck was Colorblind James, the band’s driving force: singer, songwriter, guitarist and vibes player.

After trading more calls and letters, Chuck agreed to let us interview him for a freelance article. If we could make it to his home in Rochester, NY, he’d make time for us. And so, that’s how we found ourselves on a humid June day in 1993, walking into a funky diner with a stocky, approachable guy with a head full of curls and a gentle demeanor.

But we had to cross the parking lot first. Before we could make it to the diner’s entrance, two twenty-something guys approached us with handfuls of flyers, positioning themselves between us and the door. They were god-twaddling Jesus freaks. When they saw my gimpy walk, they homed in on me like flies drawn to…well, you know.

“Come to our gathering tonight,” said God-Twaddling Thing One. “The speaker is a powerful healer,” he said, as he looked me up and down, boldly assessing my overall gimpyness.

My stomach clenched and my pulse raced. I prayed they’d back off. I didn’t want anything to ruin this amazing day to be spent with Chuck.

“Really, you should come,” said God-Twaddling Thing Two.  “He can perform miracles.”

Apparently shocked that a little gimp girl would turn them down, Thing Two decided to step up his game. He contorted his face into a rictus of utter contempt and disgust, then shouted:

“You mean you like yourself that way? Why would you want to be that way?”, his face twisted in a grimace, looking as if he were trying to spit out poison.

At this point, Chuck, Steve and I froze for a second or two. I wanted to plant my size 6 shoe with enough force that Thing Two would have to dislodge his manhood from his throat. Steve wanted to do the same to both of them. Chuck probably wanted to run back to the car and drive away, never to return.

But what could I do, really, in front of my music idol, whom I’d only just met a half hour ago? It was as if karma was putting me at the intersection of two hugely opposing forces: my rage at Jesus freak gimp haters and my desire to be pleasant so Chuck felt safe talking to us. I didn’t want him to think he’d been waylaid by a couple of violent, maniacal fans.

We entered the diner and ordered hotcakes and huevos rancheros. It took a few minutes for the awkwardness to evaporate, but soon we began a wonderful conversation. Steve and I had so many questions for Chuck about the band’s history, his musical influences and just what inspired the quirky songs we adored. After breakfast, we drove to Gennesee Valley Park where we strolled and conversed about music and life. When we said our good-byes mid-afternoon, it felt as if we were bidding adieu to a life-long friend.

We continued to play our Colorblind James albums, even returning to upstate New York three years later to hear the band play at a folk festival.

In July 2001, Chuck Cuminale tragically died of a heart attack. He was 49 years old.

He was a musical visionary, a gentleman, a true class act. His kindness was worth much more than the satisfaction I might have gotten cleaning the clocks of Things One and Two.

If there’s a heaven, Chuck, I know you’re in it.

Posted by Steve Wright Communications, Inc. at 3:08 PM No comments:

A WALK THROUGH LITTLE HAVANA ON A SPRING DAY 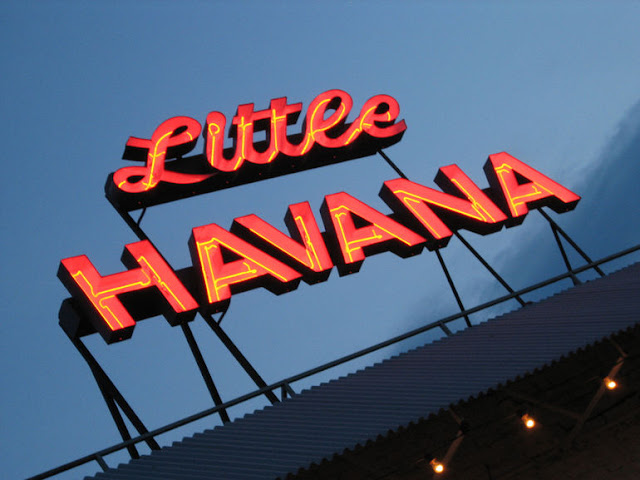 I'm made my life in Miami's Little Havana neighborhood now for 13 years. Little Havana is beautiful and gritty. Tranquil and urban. Familiar and exotic. We're 50,000 of Miami's 392,000 residents. Ninety-three percent of us speak Spanish at the dinner table. Seventy-four percent are foreign born. -- Heidi Johnson-Wright

Down the sidewalk at a gentle pace

Bungalows and stucco and mission-style homes

Spanish spoken with the rhythm of poems

Salsa and son and reggaeton

To the window for a cortadito

Into the bodega, need a pastelito

Blue eyes give me away before I speak my gringa Spanish

Girl at the counter says: "mi vida"
We just met but I'm her life, her senorita

Posted by Steve Wright Communications, Inc. at 3:01 PM No comments: