RIGHTS GIVEN SHOULD NEVER BE TAKEN AS A GIVEN 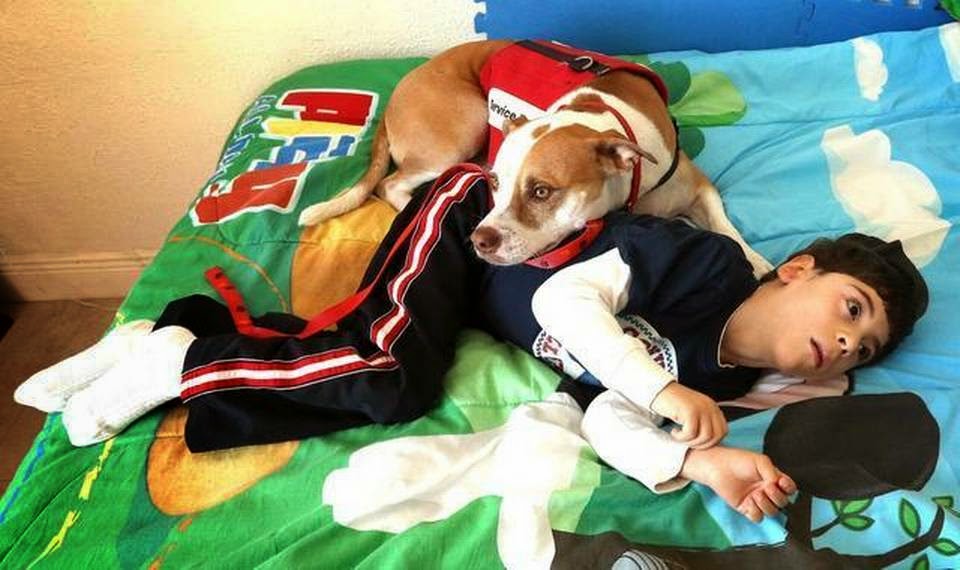 OUR RIGHTS AS DISABLED PEOPLE CAN NEVER BE TAKEN FOR GRANTED

Rights given should never be taken as a given.

Just because the law protects us doesn’t mean those protections will always be respected. Not even by allegedly respectable entities such as school districts.

Take Anthony Merchante, for example. Anthony is a cute little 7-year old boy. He has more challenges to deal with, though, then the average 7 year old. He has cerebral palsy, spastic paralysis and a seizure disorder. He cannot speak, and he uses a wheelchair for mobility.

Because Anthony is a person with a disability, he has rights under the Americans with Disabilities Act. One of those rights is the use of a service dog. And it just so happens that a bright, dedicated, professionally trained dog came into his life. The Staffordshire terrier, named Stevie, alerts caregivers when Anthony needs help.

Stevie knows when Anthony needs help stabilizing his head to keep his airway open. The dog steps onto Anthony’s wheelchair and lays across his lap. The dog alerts humans by stepping on a mat with a sensor should Anthony have a medical emergency, such as a seizure. Stevie’s vest carries medical supplies and emergency instructions for Anthony’s human caregivers.

Not only is Stevie an essential part of Anthony’s daily care, but he’s a gentleman, too. He stays at Anthony’s side, is never disruptive, doesn’t beg for food or bother anyone.

Nevertheless, Broward County, FL school administrators decided, for whatever reason, they did not like Stevie. Didn’t want him in Anthony’s school, even though the dog has never misbehaved.

Anthony’s mother tried for two years to convince the school district that Stevie is an essential part of Anthony’s life. She tried to make them see that, without the service dog, her son could not get the education he is entitled to.

The school district put up roadblocks. Administrators insisted that Stevie receive vaccinations not required of other dogs. They required Anthony’s mom to purchase expensive liability insurance and insisted she pay a handler to accompany the dog during the school day. The district even contended that Anthony didn’t need Stevie. That school staff could do all the things Stevie does.

So Anthony’s mom took the school district to court. In fact, a friend and colleague of mine – Matthew Dietz, represented her and her son. Dietz told the court that the district’s burdensome requirements amounted to “an impossible barrier,” and violated the ADA.

Ultimately, the judge agreed, ruling that is was reasonable for Stevie to accompany Anthony during the school day, “in the same way a school would assist a non-disabled child to use the restroom, or assist a diabetic child with her insulin pump, or assist a physically disabled child employ her motorized wheelchair.”

The school district can no longer separate Anthony from his service dog, and cannot impose the insurance and handler requirements on him.

Now a seven-year old boy – like the other seven year olds -- can focus on math and spelling and social studies. He doesn’t have to worry that the service dog who enables him to do these things will be taken away. That the rights he is guaranteed under federal civil rights law will be violated by a school district that refuses to acknowledge these rights.

It’s been a quarter century since the passage of the ADA. But we must never let our guard down.

Like the way Stevie watches over his friend, Anthony. 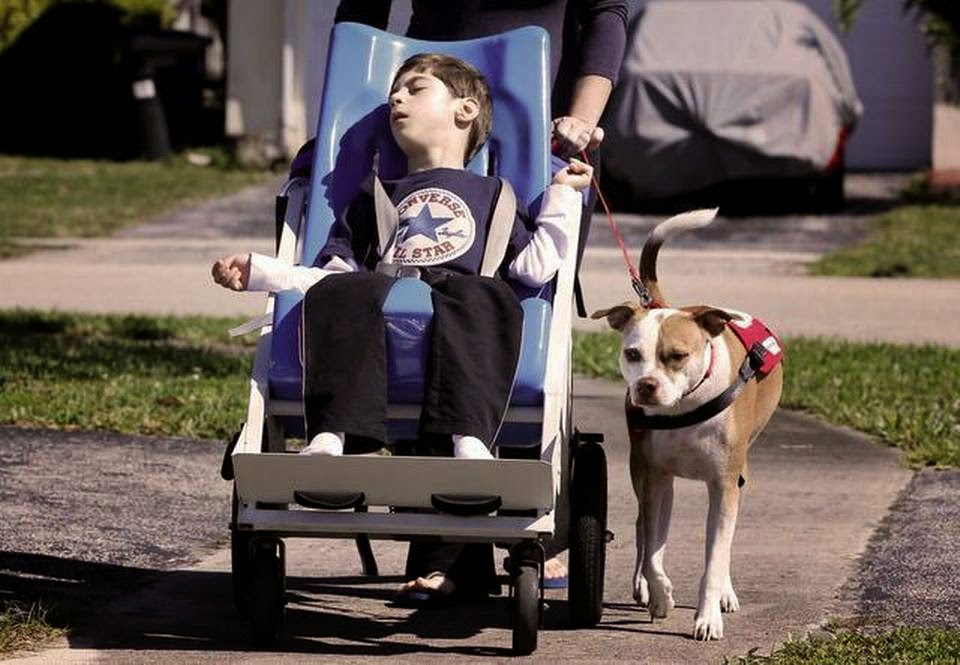 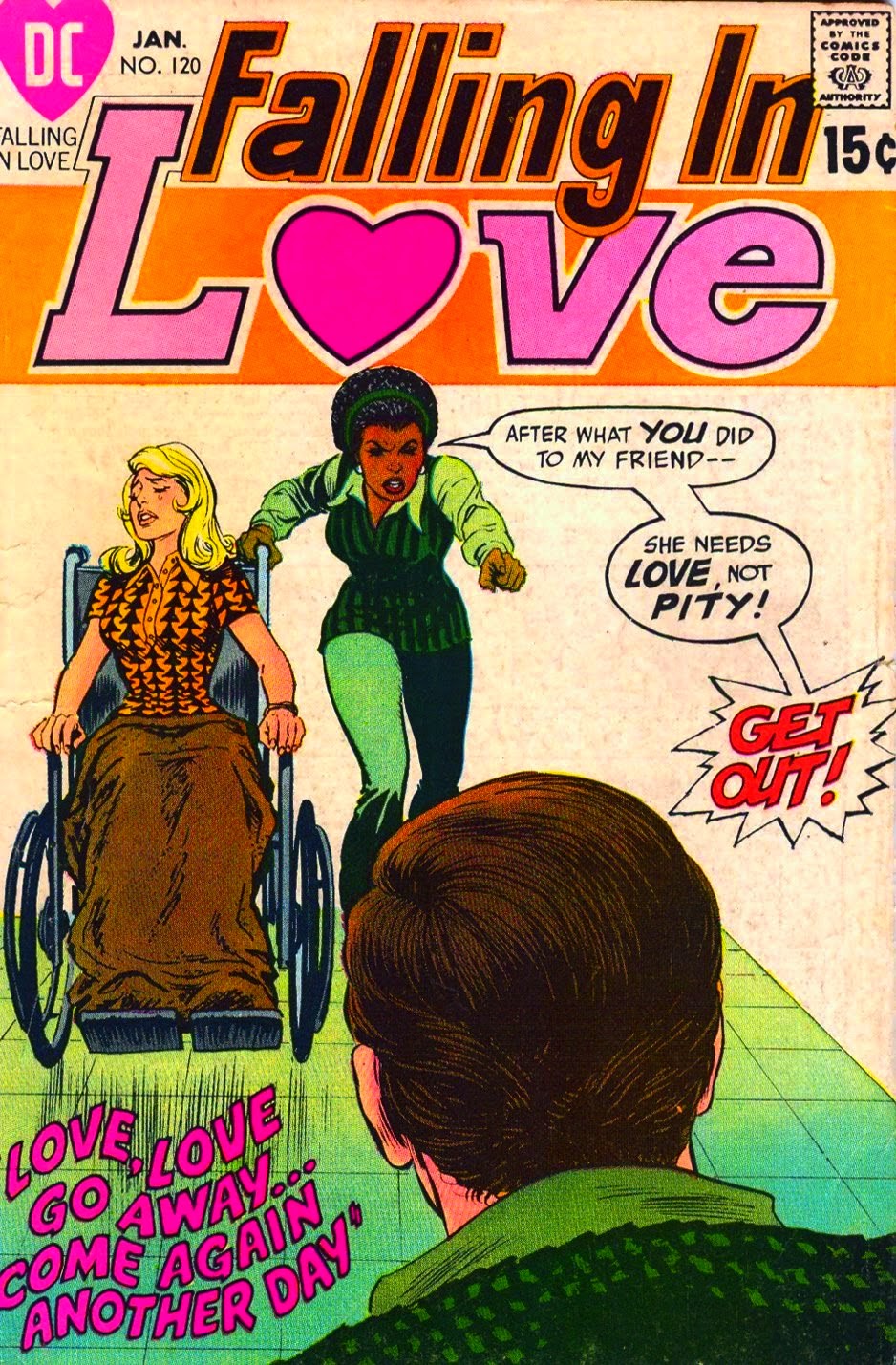 I hope this letter finds you well. I understand you were martyred in the second century A.D., though. So, depending on whose version of the afterlife is accurate, you might be doing really well. Or not.

Anyway, I’m writing to you to ask for a little good mojo. Not for me, really. But for all of my brothers and sisters in mobility-impairment cripdom. You know, us folks down here who limp, use canes and walkers or who like me, roll from point A to point B. Disabled people who struggle to get around and so are very obviously disabled.

I need your help in particular because, well, this whole mating game thing can be kinda tricky. First impressions are big. If you throw in a funny walk or a pair of crutches or – heaven forbid -- a wheelchair, many folks won’t see you as top shelf dating material.

It doesn’t help that a lot of non-crips – who are otherwise nice, bright people – buy into millennia-old stereotypes. Maybe you know the one that says we’re drooling, sex-starved perverts. Nobody dates us, because we’re crips, duh! So without a romantic outlet, we become like overly-wound watch springs ready to snap any second. And who wants to date someone who can’t wait for sex until after dinner at Red Lobster and a predictable rom-com starring Kate Hudson or Katherine Heigl?

Other non-crips will take issue with me. They’ll say “No, not me! I know crips aren’t sex-starved pervs.” Of course not. Instead, they’re certain that, when it comes to carnal pleasures, crips are utterly uninterested. We’re angelic inspirations in a semi-arrested state of development. We sit round weaving potholders, resigned to our chaste, asexual existences. And who wants to date someone unwilling to put down a potholder and jump buck-naked into the Jacuzzi?

Please don’t disregard my concerns simply because I’ve been off the dating market for more than a quarter century. Yes, it’s true that when I got married, Milli Vanilli had yet to be discredited. But I can remember back to my early college days before I met my husband. I lived in the only girls’ dorm on campus that was accessible to female wheelers.

Boys would sometimes start randomly dialing dorm phone numbers, hoping to get an anonymous attractive girl to talk to them. If they found out you lived on first floor Prentice, though, they hung up with lightning speed, since it was widely known across campus as the location of the female gimp ghetto.

No “let’s meet for beers” or “how about we go to the midnight screening of Eraserhead?” No siree.

So, St. Val, can you find it in your heart to throw a little love toward crips who may be struggling to find Mr. or Mrs. Right?

It’d be most appreciated. 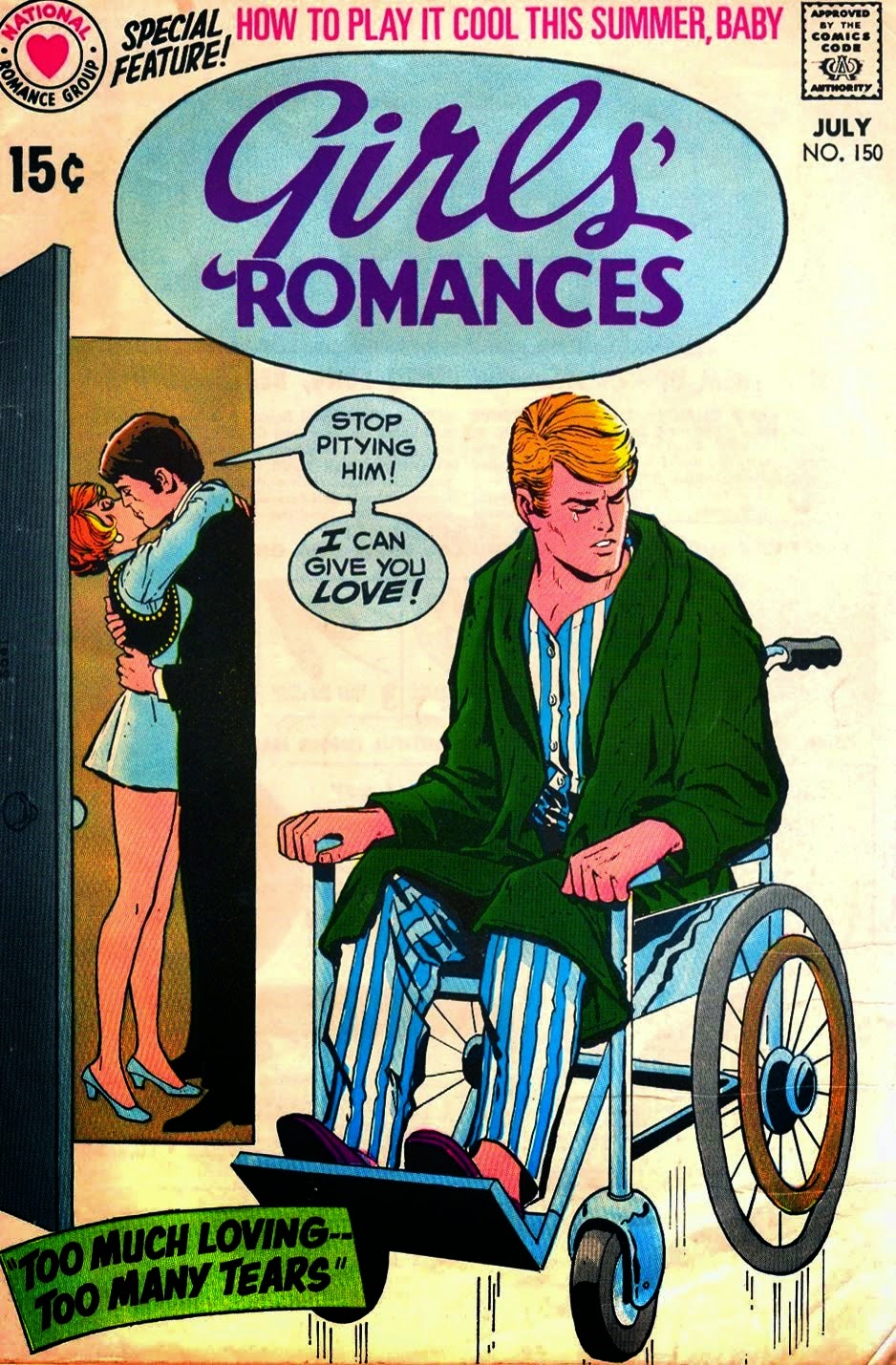 Posted by Steve Wright Communications, Inc. at 10:59 AM 1 comment: 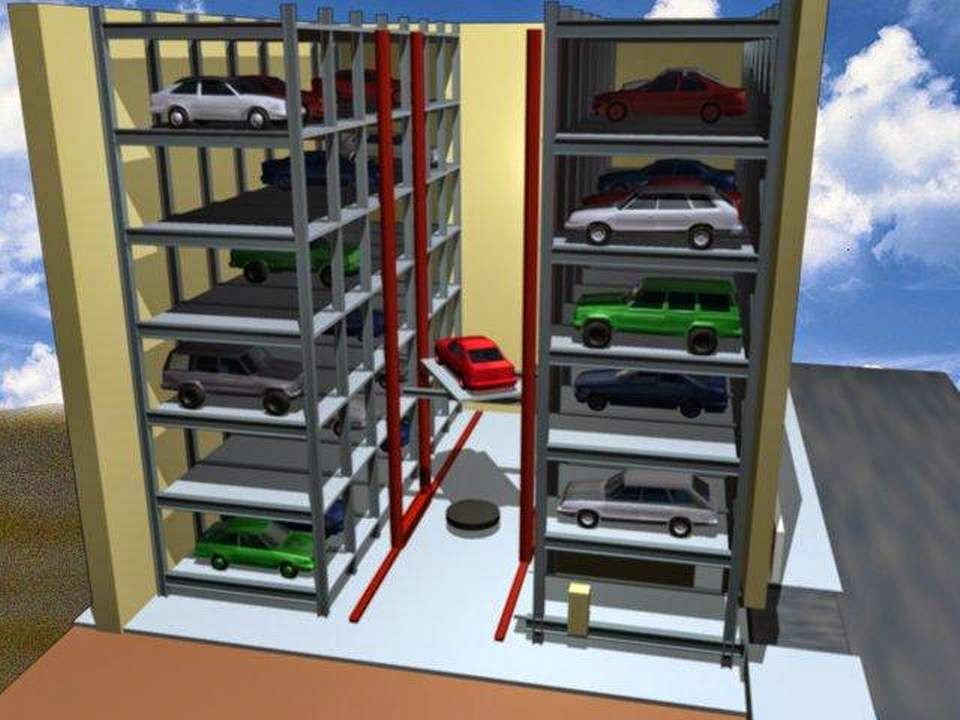 FROM THE MIAMI HERALD OP-ED PUBLISHED JANUARY 25, 2015
The average American uses 900 square feet for parking each day. The average apartment is 982 square feet. That means North Americans use almost as much room for cars as for homes. Miami’s gluttonous parking habit, and the way the city’s zoning code deals with this problem, discourages small-scale development that could greatly improve its many neighborhoods.

Miami21, the city’s zoning code, regulates development with sequential intensities assigned to zones. Simply put: The less intense the zone, the smaller the development allowed — Zone 3 allows only single family houses, while Zone 6 is assigned to areas such as Downtown and Brickell. Miami21 allocates all the ingredients for development: density, open space, building size, street frontage and green space sequentially depending on its zone. But it does not do this with parking.

Parking requirements are determined by building uses, not by a zone’s density/intensity. That means that generally, a five-bedroom home in Morningside (Zone 3) has the same parking requirements (1.5 spaces) as a studio apartment in Brickell (Zone 6). However, the Morningside mansion can typically accommodate six cars in driveways and garages, while the Brickell studio may use only one or none.
While Miami21 encourages urban infill redevelopment, we currently see few small-scale buildings that long defined the city. Few neighborhood-scaled mid- and low-rise projects are being developed, largely because of their parking demands. Intense super-block developments dominate the real-estate market because they can exploit their super size to cover their parking structures’ building costs.
Miami’s code rewards these behemoths by applying a use-based sharing ratio that exponentially reduces required parking as the building gets larger.

Additionally, a required driveway consumes about 25 percent of a small parcel’s frontage. On a superblock, it may be less than 1 percent. This difference alone can kill a small-scale project. Small property owners will often wait to be bought out by developers assembling land for mega developments, as it is rarely feasible to develop small buildings because of their parking requirements.

The result is dozens of neighborhoods blighted with vacant lots and dilapidated small buildings. There is no incentive for small-scale development, which arguably weathers real estate’s cyclical booms and busts better than mega developments that crash to a halt when the economy slows.
Cities are living, breathing organisms made up of distinctly unique neighborhoods. They cannot survive on a diet of superblocks.

Wynwood, for example, a warehouse district undergoing significant change, has required district-specific code modifications to facilitate its transformation into an arts hub. Every district and neighborhood requires different calibration to remain unique. The code needs to be adjusted to address the different nuances and shifting market trends of each area. Zoning must be an enabler, not a hindrance to the evolution of a city.

Miami21 establishes a strong framework code for the city of Miami to guide growth. But its parking requirements must be revisited to build human-scaled developments on thousands of vacant lots that should be brought to life with housing, jobs, services and activity.

Miami’s parking blues can be fixed by applying several methods at the city’s disposal, including better public transportation and especially the expansion of the fee-in-lieu program that allows developers to pay into a parking fund.

That system, already used in parts of the city, builds garages that serve multiple developments — in lieu of the burden of creating onsite parking. Miami needs to revisit, with precision, ways to encourage development opportunities for these small urban parcels.

The first major fix should be to base parking requirements and sharing ratio reductions by both land use and its increasing density and intensity (from the suburban Zone 3 up to the Brickell skyscraper Zone 6) allowed in the Miami21 code.

Juan Mullerat, an urban designer with two decades of international experience, is principal at PlusUrbia Design in Coconut Grove. 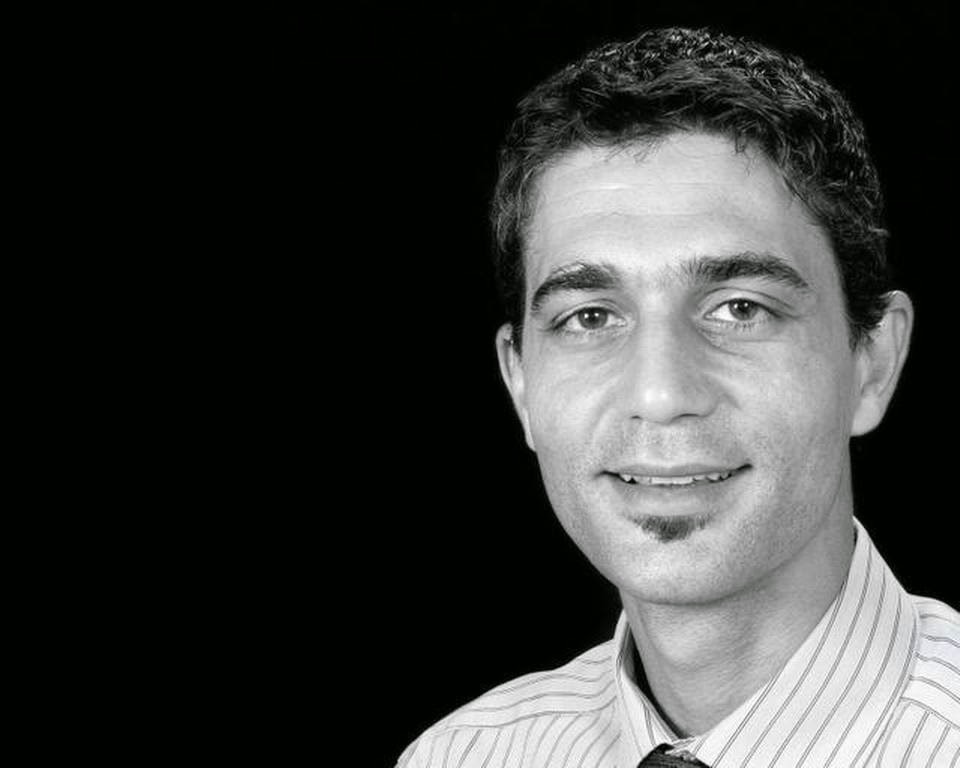 Posted by Steve Wright Communications, Inc. at 11:34 AM No comments: