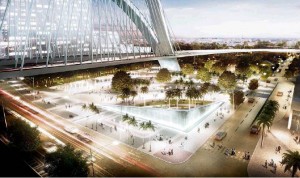 When my wife and I arrived in Miami on Election Day 2000, we were smitten with our adopted city.

But there were many things wrong with it.

There was a lack of museums and performing arts space.

The low-slung I-395 bridge and cramped passageway under it made it virtually impossible for pedestrians to move from the AAA to the land around the old Miami Herald building.

Fast forward a decade and a half and the various spaces that make up the Adrienne Arsht Center for the Performing Arts of Miami-Dade County provide affordable and world class events every night of the year.

The northern edge of Downtown proper, just south of 395, is largely filled with condo buildings and Bayside promises to reinvent itself as something more than a tourist mall.

Museum Park is open, PAMM is open and the Frost will soon complete the puzzle.

Bayfront Park is run by a dear friend of mine and is one of the greatest waterfront event spaces on the planet.

I got to play a part in some of these changes, working in both the public and private sectors.

My wife, Heidi Johson-Wright, got to review wheelchair access at public facilities as part of her job with Miami-Dade County.

Now, in my work with PlusUrbia Design, I once again have gotten to play a small part in the big revitalization of my city.

Then we started the yet-to-be-finished task of pushing to make Calle Ocho a complete street.

Now, PlusUrbia is displayed in media all over town, for its work for the Town Square Neighborhood Development Corporation.

I used my Miami City Hall contacts to introduce PlusUrbia to the incredible leadership at both Town Square and the Arsht.

PlusUrbia's concept design of a flexible park-plaza for the Arsht Gateway is featured in the Miami Herald.

The hope is FDOT, which is backing a signature bridge, will team with the County and others to make sure the urban realm around the new bridge is welcoming to all...that it will, pun intended, build a bridge between Overtown, Downtown, Omni and other crucial core neighborhoods.

I am humbled to have gotten to play a part in making the day to night improvements in the core of the Magic City. 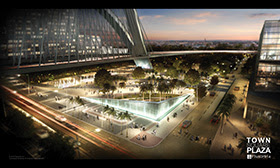 AS PART OF THE I-395 SIGNATURE BRIDGE


Today, the Town Square Neighborhood Development Corporation (“TSNDC”) – the nonprofit organization created to foster development of Miami’s Town Square neighborhood –unveiled an aspirational vision for Town Square Plaza, a multifunctional space that will promote community gathering in the thriving urban core. The design encompasses the area south of The AdrienneArsht Center for the Performing Arts of Miami-Dade County and underneath the proposed I-395 “signature bridge”.
"The plaza creates a public lobby for the Arsht Center and a
multifunctional space for Downtown. The design turns a challenging
space into a vibrant gateway,” PlusUrbia director Juan Mullerat added.
“We are excited to be part of this legacy in creating new urban
places that embrace the multicultural heritage of Miami and break down
longstanding barriers that stood between communities that can now
come together as one.”
“The vision was clear, create a picturesque space that not only
complements the signature bridge above but also redefines the
experience for residents and visitors”
Read the full press release here
Posted by Steve Wright Communications, Inc. at 2:00 AM 1 comment: 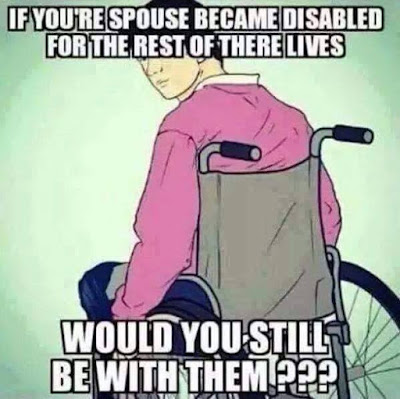 ...AND OTHER UNQUESTIONED ACTS OF BIGOTRY

Perhaps by now you’ve seen the Internet meme making the rounds of a drawing of a guy in a wheelchair. He’s looking back over his shoulder, a sad, pathetic expression on his face. Surrounding him are the following words: “If you're (sic) spouse became disabled for the rest of there (sic) lives, would you still be with them???”

Yes, dear reader, it is taking all of the strength I can muster to resist calling the meme’s creator a moron incapable of knowing the difference between "you're" and "your" and “their” and “there,” or even knowing how to use a software grammar check function. And, yes, I am irritated with the use of the pronoun “them,” as if the question poses the hypothetical situation that this is a pluralist marriage that includes multiple partners who “became disabled” all at once. Perhaps it’s implying the crash of a plane on which the multiple marital partners were flying, or they all contracted a rare tropical disease while on safari together.

I also believe it is quite likely that anyone who uses three question marks in a row probably dots every letter “i” with a tiny heart. For that reason alone, the meme’s creator should be placed a stockade in the village square and bombarded with rotten produce.
Nevertheless, it’s not the meme’s grammatical atrocities that have inspired me to write this post. It is the sheer butt-puckering bigotry of the question being posed. Why is it an acceptable question worthy of an answer?
Would it be appropriate to ask: “If your spouse sent in DNA to 23 and Me and learned he/she had African ancestry, would you divorce him/her?” Or “If your spouse told you his/her grandparents emigrated from Uruguay, would you make him/her relocate permanently to the guest bedroom?” Or perhaps “If your spouse converted to Judaism, would you toss him/her off a cliff?”

I’d like to think that most decent human beings would be appalled by questions about whether a spouse remains worthy of love even if he/she is of a different race, religion or country of national origin. Yet when it comes to disability, many people – such as those that actually answered the question on Facebook – feel it’s fine to weigh the option of giving walking papers to the person they married.

I’m not sure whether to be pissed off or profoundly sad that a quarter century after the passage of the ADA – the most comprehensive civil rights statute ever enacted to protect disabled folks from discrimination – societal attitudes remain in the Dark Ages. We continue to deny that illnesses and health issues are inextricably part of the human condition. We still cling to hierarchies, to notions of “us versus them,” to assigning value to other human beings based on their ability to meet an often unattainable ideal.

Perhaps I should buy a more comfortable mattress for the guest bedroom.

Posted by Steve Wright Communications, Inc. at 12:57 PM No comments: 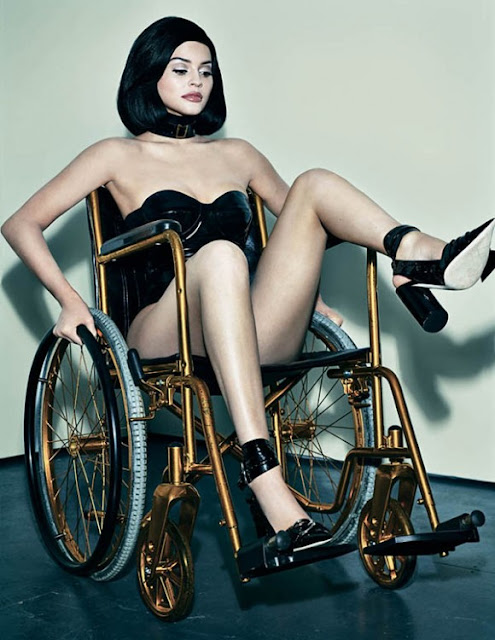 By now, you’ve probably seen the fruits of the Kylie Jenner photo shoot in the current issue of Interview magazine. The teenage reality TV star is dressed provocatively in leather bondage gear. In some of the shots, even her delicately-curved derriere is exposed.

But with all of the photos we average folks are bombarded with on the Internet – celebrities posing in little more than body paint and glitter, fashion models striding nearly nude down catwalks – Ms. Jenner’s photos are not terribly remarkable. You, dear reader, have probably seen much more revealing stuff on your friends’ Instagram accounts.

So why am I even mentioning this? Well, it seems that Ms. Jenner has revealed something intimate about herself that goes beyond bare skin.

Looking at the shots left me flummoxed. You see, I thought Larry Flynt was the only gimp out there rocking a gold chair.

Then I tossed that thought aside. I mean, if anybody else could acquire a golden gimp-mobile, it would be a member of the storied Kardashian-Jenner family.

Next, my eyes went to the expression on Kylie’s face. In one photo, she stares off into space as if she’s perhaps experiencing a petit mal seizure. My cynical side wanted to dismiss this as the typical empty gaze of a high fashion model. You know, that look that says “I am insanely gorgeous and make $10 grand an hour, yet I’m so misunderstood.”

But then I realized that Ms. Jenner is really trying out the look of someone who has a disability. She wants to live it, to feel it.

Kylie’s tired of her incredibly privileged, affluent, non-disabled life. She wants to know what it’s like to have precarious health, to struggle to find employment yet keep her government benefits so she can pay for attendant care. She longs to spend weeks trying to find an accessible apartment she can afford, only to have the landlord tell her that the “no pets” policy means she can’t bring her service dog. She yearns to sit in the rain waiting for a bus, only to find that the one that stops has a broken lift and she has to wait another 20 minutes for the next one.

Kylie Jenner, I pronounce you an honorary gimp girl. Welcome to the club.

Posted by Steve Wright Communications, Inc. at 7:40 AM No comments: