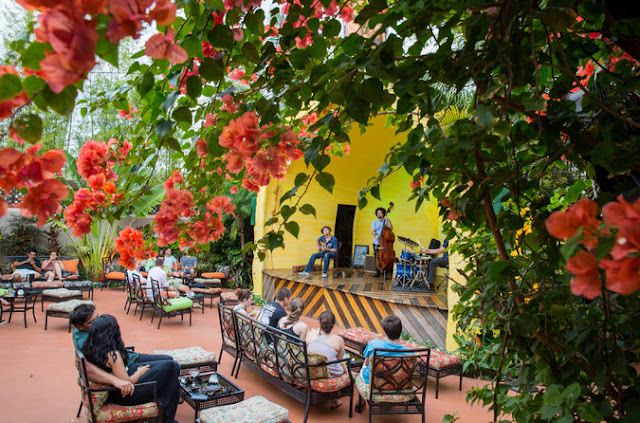 The New York Times Loves Calle8 -- Can we please redesign it for pedestrian safety.

As night approached so did the lure of Little Havana’s night life. Ball & Chain, I discovered, is a gorgeous, lush modern stab at a classic Cuban nightclub with napkin-over-forearm service.

The mojitos here are a near-perfect blend of rum, lime, club soda, fresh mint and sugar, and the tapas are flavorful and Cuban inspired.

During the 1950s, the club brought in headliners like Billie Holiday, Count Basie and Chet Baker.

That night, the bar was packed with millennials, the back of the club having transformed into a tropically decorated open-air patio, and the Pineapple Stage animated with Latin jazz. 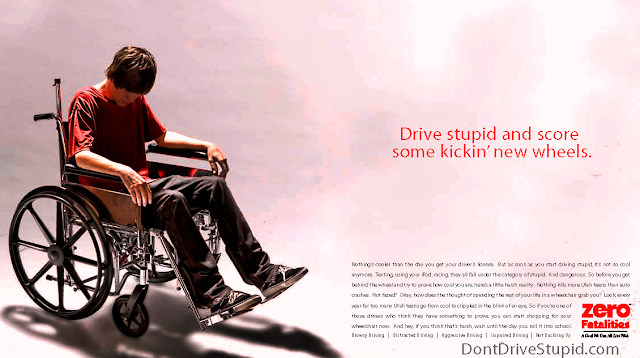 A FATE WORSE THAN DEATH?

Step right up, kids. I’ve got something I gotta tell you, and that something it this: drive stupid and you’ll face the worst possible fate you could ever imagine.


What do I mean by “drive stupid?” I mean taking your eyes off the road, especially for stupid reasons. Like to replay that Demi Lovato tune. Or to re-adjust those flesh tunnels in your blown-out earlobes. Or to send a text from your Hushed app to that unwitting recipient who thinks you’re a chick from Barcelona when you’re really a dude from Barstow.


You see, distracted driving can have some mighty brutal results. Like wrapping your dad’s Kia Sorrento around a tree. Think how mad he’s gonna be when it’s totaled ‘cause your leg is now attached to the carburetor.


I know what you’re thinking. You’ve seen the “scare ‘em” movies in Driver’s Ed of real-life crashes. You think I’m trying to frighten you with the specter of death.  Au contraire, amigo mio. I am trying to make you piss your pants at the thought of something much worse than death: being disabled.


Being disabled is way worse than death. At least a corpse is still a full-fledged person. But a wheelchair user? Truth be told, going from “cool to crippled” would drop your value to about six-tenths of a human being. That’s why we’ve placed a non-disabled kid in a vintage wheelchair, told him to hang his head in shame, and put his photo on the above poster.


Being disabled is absolutely the worst thing we could think of. The worst combination of fear and shame imaginable.


Worse than running over a toddler. Worse than doing time for vehicular manslaughter. Worse than being dogged by a felony record. Hell, worse than death itself.
So the next time you text while driving because you figure ending up in a coffin doesn’t sound so bad, remember: you could end up in a wheelchair instead.

For more satire in the name of social justice, visit

Posted by Steve Wright Communications, Inc. at 12:30 AM 1 comment: 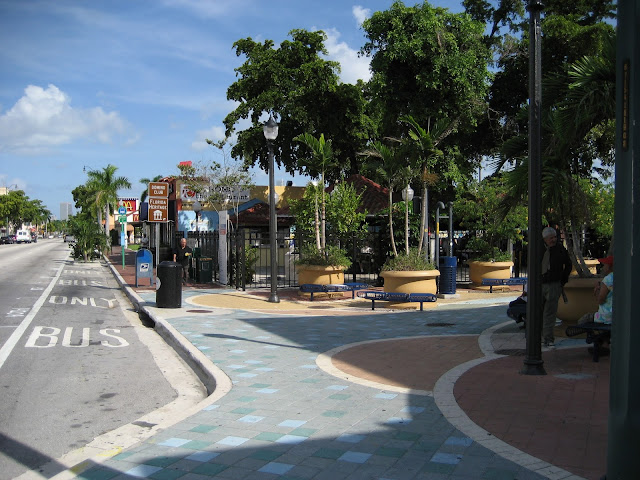 To Anyone Else Who Must Accept a Life of Chronic Pain

FROM THE MIGHTY -- We face disability, disease and mental illness together 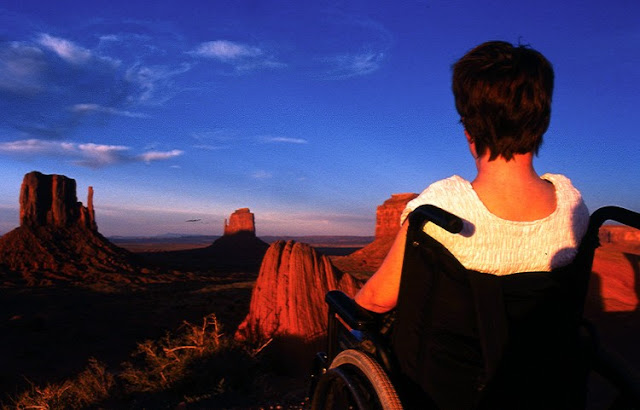 I live each day with a rotten reality: I will have pain every waking moment until the day I die.
Until they put me in the crematory and reduce me to a five-pound cardboard box of ashes, I will always be in pain. I’ve known this for a long time, but somehow putting it on paper makes it more real. And a little more frightening.

Rheumatoid arthritis (RA) cleaned my clock — plain and simple. When it made its arrival my fourth grade year, my disease spread like wildfire, decimating joints from head to toe. By the time I graduated from high school, I had both shoulders and both hips replaced. Both ankles were permanently fused in place. My hands and feet were destroyed.

From the moment of my diagnosis, I battled not just physical pain but also anxiety and depression. I didn’t know that’s what my emotional suffering was called, or that it was linked to fear of my own mortality and anguish at my body’s disintegration. But I certainly understood what it meant to live in a constant state of fear. Even everyday things like meeting new people made me sick with dread. My finger joints were swollen and inflamed. If someone grabbed my hand to shake it, my knees nearly buckled from the pain. My stomach knotted when I knew I had to climb stairs, taxing my already painful knees and ankles. I held a bottomless pit of despair inside me which I tried time and time again to blot out.

The domino effect of the RA’s destruction was more than any kid could be expected to cope with. Yet no one — no medical professional of any stripe — ever suggested to my parents that I could benefit from talk therapy or even pain management skills. That’s astonishing, given that folks in the health professions have long been aware that living with chronic pain makes someone susceptible to depression.

The reality is that virtually all forms of arthritis bring chronic pain and are incurable. They attack, destroy and stay put until they’re good and ready to depart. My disease departed when I was in my early 20s. Although I’ve not had any active RA since Wham! was in the Billboard Hot 100, the damage to my natural joints has been devastating and permanent. I still have to depend on those joints every day to pull on a shirt, walk, stand up from a chair — anything requiring movement. Even the gentlest of activity taxes joints that have been weakened from the damage done.

It’s like a wooden house whose interior support beams have been chewed through by termites. The termite swarm may depart, never to return. Yet at any time, the slightest stress on the damaged and weakened support beams may cause parts of the house to come crashing down.

Most days, my pain is like white noise. It remains at a level which I can mostly tune out. But some days the pain ratchets up. Like Glenn Close’s character in “Fatal Attraction,” it will not be ignored.

You are stronger than you could ever imagine.

http://themighty.com/2016/04/accepting-life-of-chronic-pain-from-rheumatoid-arthritis/
Posted by Steve Wright Communications, Inc. at 12:30 AM No comments:

EDUCATION OF ALL CHLDREN 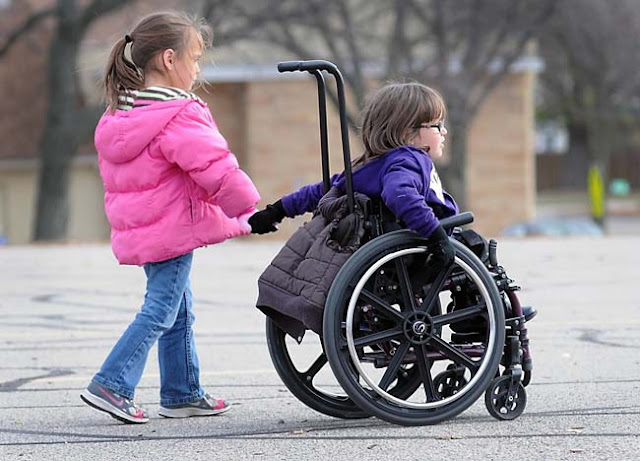 
2015 marked the 40th anniversary of the Education for All Handicapped Children Act (EHA), landmark federal civil rights legislation that allows kids with disabilities to sit in school desks alongside non-disabled students. Before 1975, the U.S. was a nation in which the educational needs of eight million “handicapped children” were not being met, with one million such children excluded entirely from the public school system.


The most severely disabled children were forbidden by law to pass through the schoolhouse doors. Among the other seven million, most attended segregated schools with very rudimentary curricula or were sequestered within segregated classrooms. Most were tasked with just busy work and training for menial jobs.


The EHA later evolved into the Individuals with Disabilities Education Act (IDEA), which defines kids eligible for services as those who have “a disability that adversely affects academic performance.” Of the eight million children mentioned in the EHA, it’s likely that many had orthopedic that didn’t impair the ability to learn but pushed them into segregated settings. Today, approximately 95 percent of kids with disabilities are attending regular public schools. About two-thirds pass school days alongside their non-disabled peers.


But don’t uncork the champagne just yet.


While U.S. law creates a framework for an integrated setting, good intentions don’t always add up to a meaningful education. Parents, students, school administrators and teachers must still shape a free appropriate public education in the least restrictive environment.


My non-fiction memoir piece, “Crip Cargo,” appears in the current issue of this literary magazine for the disability community. An accessible, balanced platform where a piece about a promising future can sit next to a glimpse into a bleaker reality. Readers look together into the dark and the light and connect to both. To see and see again. To see beyond disability.


Don’t expect the usual mass media-crafted tropes of super-crip, inspirational gimp or pathetic victim. The pieces relate indignities, triumphs, and moments of silent or not-so-silent joy. At the heart of any education lies communication. Telling our stories makes us real, vibrant and not-to-be-ignored.
http://earthboundtomboy.blogspot.com/2016/04/real-vibrant-and-not-to-be-ignored.html
Posted by Steve Wright Communications, Inc. at 4:11 PM No comments: 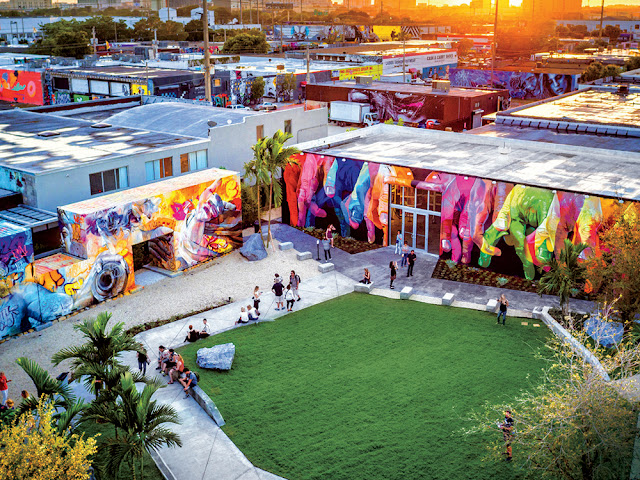 The evolution has already started at Goldman Properties, which recently expanded the Wynwood Walls by purchasing an adjacent property dubbed Wynwood Garden.

While the expansion allows for larger events—like the concert series that Goldman Srebnick is starting in May or high-profile weddings (and nightlife impresario David Grutman’s recent engagement)— it also provides room for more street art, which is the foundation of the development. 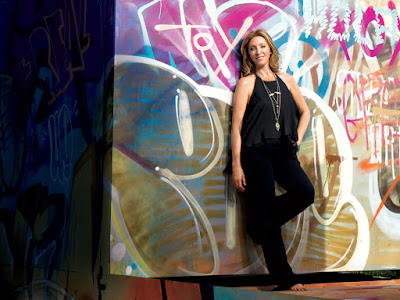