To the Caregivers I’ve Known

FROM THE EARTHBOUND TOMBOY FILES OF HEIDI-JOHNSON-WRIGHT 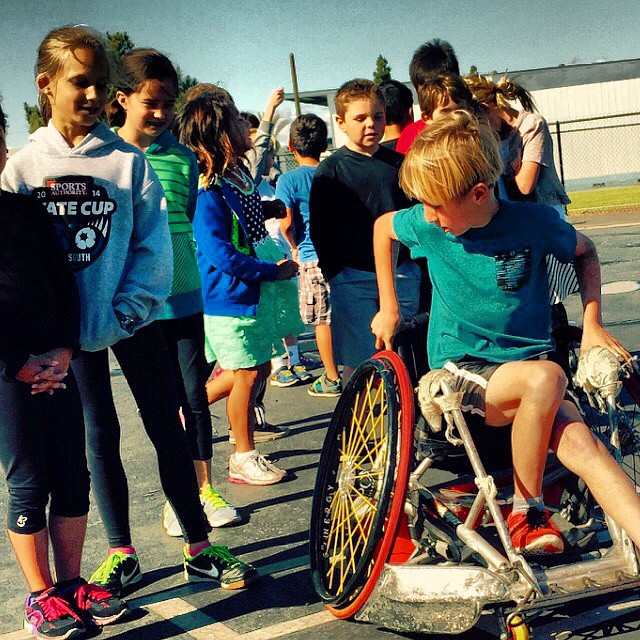 by Heidi Johnson-Wright
Being cared for by others over your life should be a reverse bell curve. You start out requiring a lot of help, gradually need less and less, live decades independently, then your needs return toward life’s end.
Once upon a time, I was in lock step with this blueprint of how we insist normal life should be. I was an eight-year old who rode a bike and climbed trees, a healthy third-grader who had mastered most personal care chores. Then rheumatoid arthritis fell from the sky like a white-hot shower of napalm. In a matter of months, dressing and grooming and cutting up food became monumental tasks. From then on, I have had to depend on caregivers for many simple and highly personal tasks.
I have had many caregivers thus far in life: a few dedicated family members who have done it for free and the vast majority who have been paid for their services. Sometimes family helps out of love and other times – let’s be honest – out of moral obligation. We then assume that the ones who get paid see dollars as their goal when sometimes they also stick around for the personal connection. They develop something of an emotional investment in the client.
Much has been studied and written about the burdens of caregiving for disabled offspring or how the sandwich generation are ground down to a nub by their obligations towards both kids and elders. All of it is valid and worthy of discussion. But what about the recipients of care, especially us adults who are supposed to be able to wash our own hair and pare our own nails?
When I was a teenager, I felt especially self-conscious. I was less concerned about needing help than I was sensitive to my personal appearance. I passively accepted my gimpdom but felt embarrassed to get naked in front of strangers.
When I started college at 17, I hired my first personal care attendant. I was anxious about the arrangement. Could I depend on her to get me up and ready so I wouldn’t miss my van ride to class? We quickly built a relationship of trust. I soon felt a bond with Lexie, the punk poetess who would be my caregiver and roll model throughout my four years of undergrad.
One time, Lexie was stricken with a devastating flu and bout of laryngitis. She was much too sick to work, so I temporarily hired an attendant already employed by another girl in my dorm. The sub was pleasant and punctual and resembled Dick Butkus in bibbed overalls.
She’d never heard of Captain Sensible nor seen I Am Curious (Yellow.) I soon developed an irrational dislike for the poor woman though I tried not to show it. I deeply missed Lexie and fretted about her health.
Finally, after two weeks, my door swung open one morning.
I thanked God Lexie – Sally Bowles to my Heidi of the Swiss Alps -- had been returned to me in fine fettle.
Lexie was always dependable, but other paid caregivers were not. As I got older, I realized I would much rather have an inexperienced attendant who is reliable, personable and shows initiative than an experienced one who is always late or I can’t bond with.
Family caregivers can be wonderful because of the memories and private jokes you share. If they love and accept you, all the better. But I have always felt a greater indebtedness to family members than those I pay. That indebtedness can eat at your heart.
A loved one can hug me and tell me I’m not a burden, but the truth is, I sometimes feel like one. I love the concept of respite care but I also feel a sense of shame that it’s needed in the first place. Truth is, the simple tasks of my daily existence can weigh down those dear to me, can pull them down into depression and exhaustion. That can be very tough to live with.
Perhaps we could take a page from the book of countries who are – gasp! – a tad more democratic socialist. Places where tax dollars fund basic attendant care for folks with disabilities so the need for respite care never arises.
Once we accept disability is often a natural and expected part of the human condition, then maybe we can forge a society that cares for all.
http://earthboundtomboy.blogspot.com/2016/04/to-caregivers-ive-known.html
Posted by Steve Wright Communications, Inc. at 12:00 AM No comments: 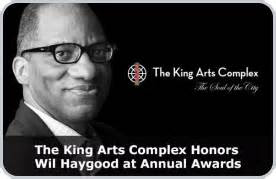 My dear friend and writing mentor Wil Haygood will be on In Depth this weekend.

Author Wil Haygood talks about his life and career and responds to viewer calls and questions. 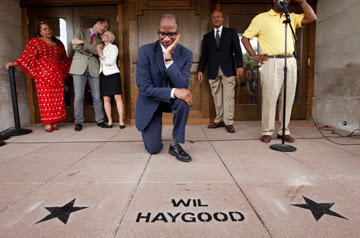 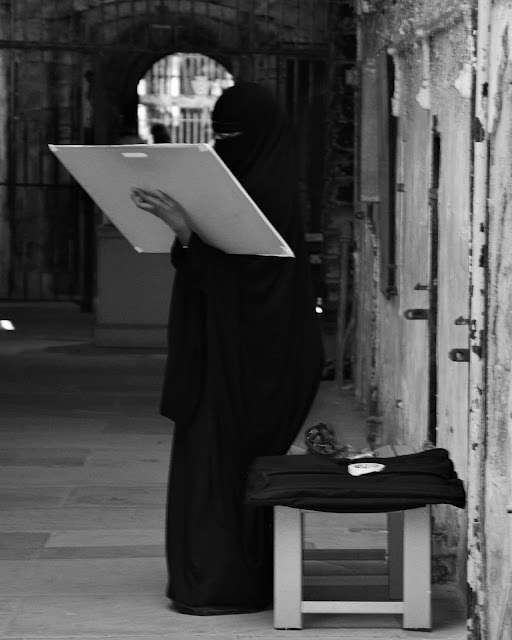 We almost never put captions on our photos. But this one demands that we do. It was taken in the former Eastern State Penitentiary in Philadelphia. Once home to Al Capone, it now hosts visitors in a largely wheelchair-accessible setting. It also hosts art students and displays art in former cells. The observant woman in the photo was concentrating on her art when we took her portrait from afar. Thanks to a great Nikon telephoto lens and some cropping, we have this beautiful image without disturbing her while she focused on creative pursuits. We are proud to live in a nation of diversity.

We started in May 2010 -- writing about sustainability in Las Alpujarras, south of Granada in Spain.

We posted almost daily back then.

Not quite six years later, we have had 100,000 unique visitors to the site.

The total number of visitors is nearly double that number.

They have read serious stories about disability rights.

They have seen whimsical photos of Miami, Latin America and Europe.

They have read enough words to fill three books.

We promise to keep writing about Urban Travel, Sustainability and Accessibility.
Posted by Steve Wright Communications, Inc. at 12:00 AM No comments:

Redesigning the Iconic Thoroughfare at the Heart of Little Havana

Will Calle Ocho become a “complete street”? Or remain a highway? 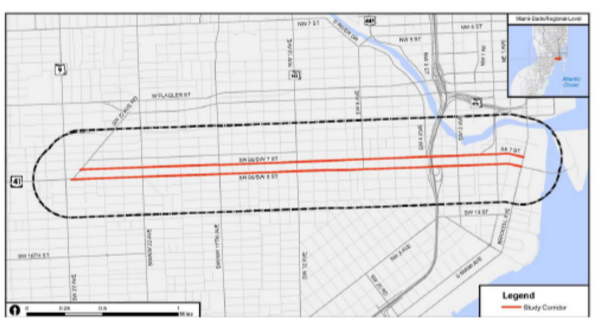 Thanks to Tanvi Misra for her brilliant telling of the Calle8 saga in CityLab, The Atlantic's urban affairs platform.  Be sure to visit mycalle8.org to support the cause.

Here's taste of the story:

The National Historical Preservation Trust put the area on its list of 11 most endangered sites in 2015 because of its dilapidated architecture.

Plusurbia’s plan, however, would only foster and conserve economic and cultural diversity, the firm says.

“Everyone benefits by a blend of people,” Steve Wright, president of marketing communications at Plusurbia, tells CityLab via email. “No one benefits from monoculture.”

Click for the full story
Posted by Steve Wright Communications, Inc. at 3:50 PM No comments: 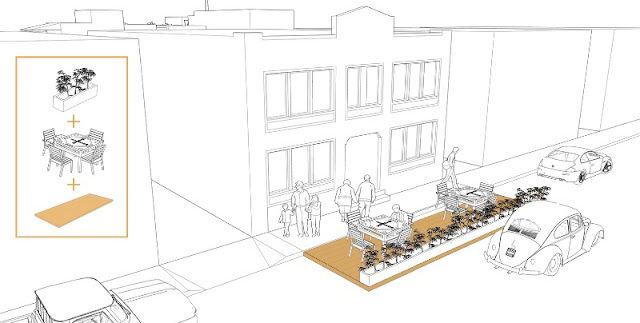 PLUS URBIA DESIGN SUBMITTED THIS IDEA TO THE PUBLIC SPACE CHALLENGE BY THE MIAMI FOUNDATION
My idea to improve this place...

Create a parklet out of a parking space in East Little Havana (ELH) residential area. A parklet is a low-cost, high-impact urban oasis created out of parking spaces (asphalt). ELH has virtually no open space. This parklet would create an open space (to play dominoes) in a densely populated area that lacks gathering spaces. Civic pride can be strengthened through the simple joy of a safe, welcoming place carved from the intensity of the city.

So that people could...

Have a gathering place in the dense urban neighborhood lacking on open space. Diversity, density and proximity to jobs are East Little Havana’s strengths. But all those people have very few places to gather to play dominoes, discuss politics and rest their bones on comfortable chairs. This parklet is for the locals, away from the tourists of Calle8. Separated from traffic, raised above street level to connect to the existing sidewalk, this small grouping of tables and chairs can be the start of something big – an emphasis on livability in East Little Havana. 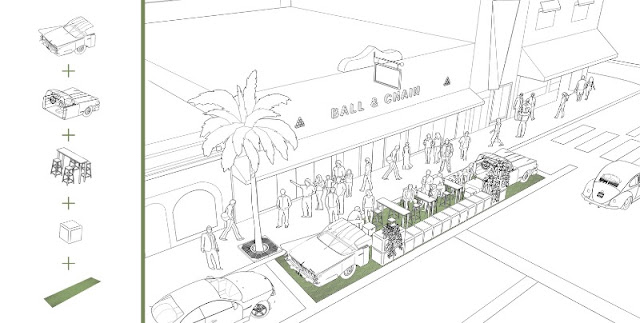 My idea to improve this place...
Create a parklet out of two parking spaces in the heart of Little Havana’s Calle8. A parklet is a low-cost, high-impact urban oasis created out of parking spaces and made even with the sidewalk for easy access. A parklet can create green space out of concrete. Some serve as outdoor café space to activate the street. This parklet would use iconic design to strengthen the identity of Miami’s most famous, historic and authentic neighborhood.

So that people could...
Enjoy the history, music, food, architecture and ambiance of Calle8 while taking a big step toward humanizing the urban corridor. Three million people per year visit Little Havana, but many are taken aback by the 3-lane, 1-way commuter highway that Calle8 has become. This parklet will capture the essence of Little Havana’s art, salsa music, domino players, coffee windows and Cuban heritage. A parklet will unlock Calle8’s potential as a safe, walkable, prosperous and livable main street destination for locals and visitors. 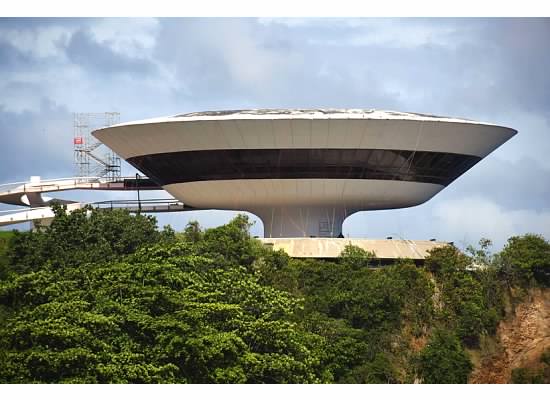 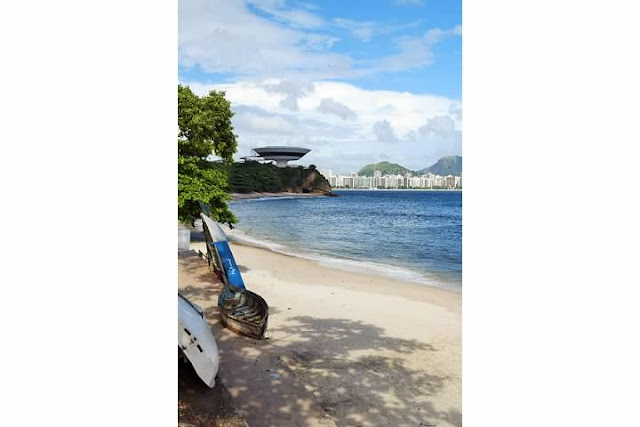 The MAC is probably the only museum we have every take a ferry and taxi to visit -- with no intention entering to see the collection inside.

The journey and views are worth the time put into the visit.

The collection, we understand, is underwhelming.

Not to mention the modernist building is under going massive repairs after opening only two decades ago.

The restaurant -- great views, lousy food -- is open, but not the galleries.

On the plus side, Niemeyer's love of concrete ramps creates one of the world's most exotic and long wheelchair-accessible entrance.

The modernist space ship of a building is across Guanabara Bay from Rio de Janeiro.

The best way to get there is to take the ferry from Praça XV to Niteroi. It costs about $1 USD and take less than half an hour.

A taxi to the MAC costs no more than $3 USD.

Be sure to walk five minutes downhill to marvel at the beautiful Ilha da Boa Viagem. 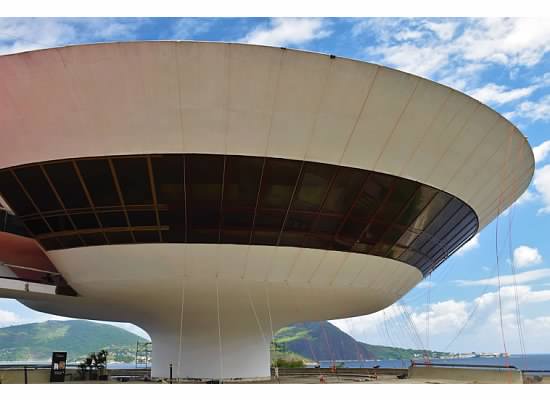