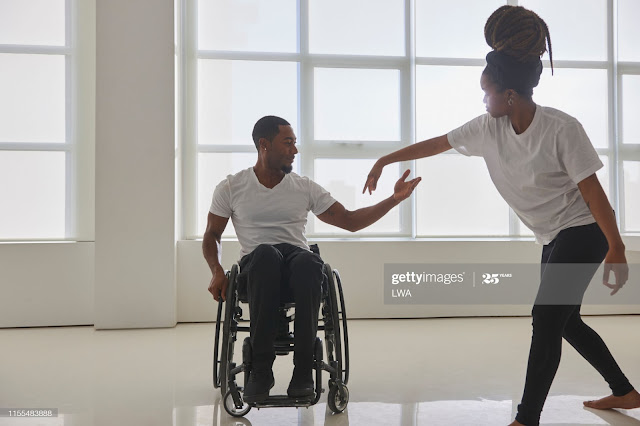 Curious, I went online. I found tons of people with disability clip art.

(Getty Images and Verizon Media even teamed up to create The Disability Collection.)

Diverse image of people with disabilities could readily be dropped onto the wide sidewalk, safe street crossing, bus stop, walking trail and every other pedestrian-friendly drawing in master plans.

I note, by no coincidence or accident, people of every diversity—except disability—in these slick images. 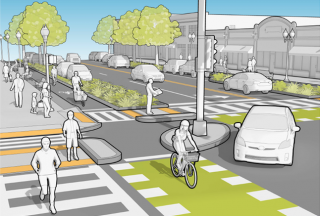 In these enlightened times, we (thankfully, correctly, appropriately) see a diverse tapestry of people in media.

Talk five minutes to a planner and he or she will tell you they are the most diverse and enlightened of the many practitioners that shape the built environment.

As such, I wouldn’t expect to see a sample street section or civic space—with dozens of people enjoying the new human-focused design—and all of them are 30-year-old white males.

And I never do.

Planners know (whether it is based on truly embracing all, or simply understanding they better market to all) to embrace ethnic diversity in those little mock-up, computer clip art human beings moving about their imagined new towns. 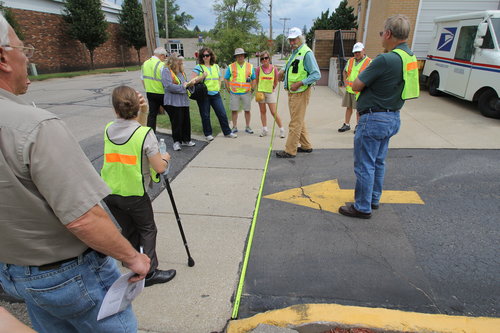 It’s a shame. Most pedestrian-focused design, supported with premium public transit and multimodal mobility—could create a near utopia for people with disabilities.

But though they are a prime consumer, people with mobility disabilities clearly do not merit even one moment in the vision of these ableist, arrogant designers.

This is the same mindset that for decades, meant greeting cards, TV ads and catalogues were virtually devoid of anyone who remotely looked Black, Hispanic, Asian, LGBTQ, etc.
The big companies were ready and willing to make a buck off minorities. But show them as end users of carefully managed brands?
Heaven forbid!
The world isn’t ready for it
Posted by Steve Wright Communications, Inc. at 9:00 PM No comments: 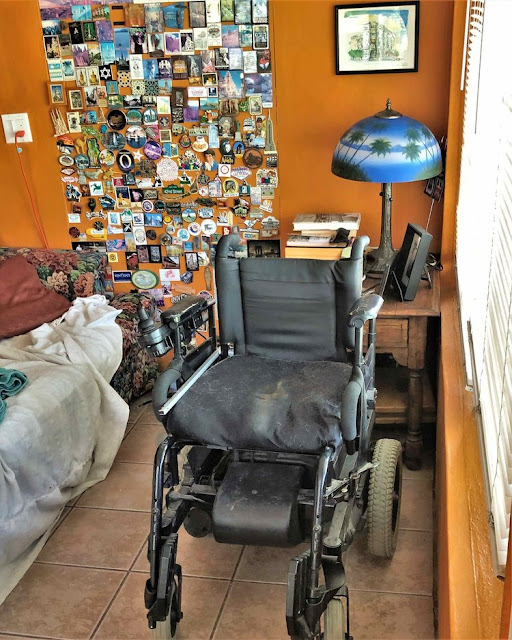 —and those who move about using crutches, walkers and other assistive mobility devices—do not merit one percent of their images or even one line in their 1,000-word design essay.

Apparently, all the people with disabilities have died or been sent off to Mars in their depictions of a brave, new, pedestrian-as-king world.

Or maybe they are still being forced to stay home, as if the ADA never existed.

IT SHOULD NOT BE PAVING OVER MELREESE SO BILLIONAIRES CAN PROFIT 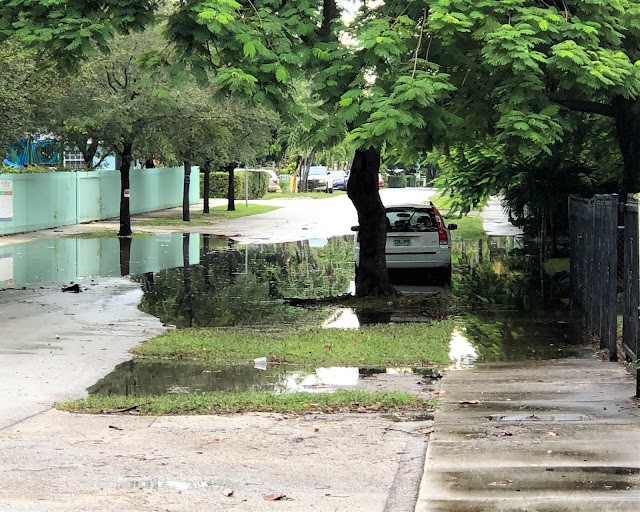 The worst flooding is opposite where a community center paved over grass.

A decade ago, the city wanted to pave over the entire neighborhood park for a for-profit tennis center.

The Melreese plan is most idiotic I've seen.

And I've seen a lot.

It proposes to pave over 100+ acres of green space.

Which will create a traffic jam that will hurt the region's #1 economic engine – Miami International Airport.

1)     1) A soccer stadium in a time when everyone is afraid to sit elbow to elbow for pro sports.

2)      2) A megamall, when mall/conventional retail was already dying before the pandemic  and will shrink (dozens of major chains bankrupt and closing) more now.

3)      3) A huge hotel (when travel for business/pleasure could be negatively impacted for a decade.)

4)     4) Office development (promised to bring high paying/high tech, as all BS schemes do) likely to sit empty as thousands of office-using firms reduce class A space.

At best, this sweetheart deal for the riches of the rich will simply rob jobs from mom and pop existing businesses.

At worst, it will pave over the largest inland grassy land mass in the entire city, when flood control for sea level rise is needed.

The Melreese farce deal can be canceled now.

The developer misleads and says a (super low turnout) vote made stadium and development a reality.

If this nightmare becomes a reality, it will set a toxic precedent -- that park space can by prostituted to enrich billionaires. 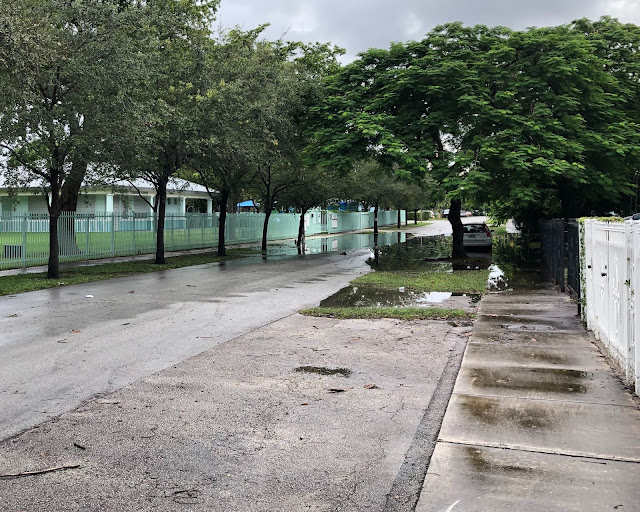 Posted by Steve Wright Communications, Inc. at 10:00 PM No comments: 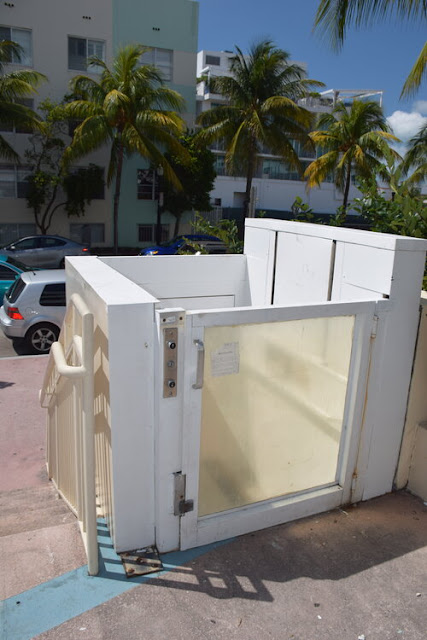 Those who earn their bread have reacted to this and are positioning themselves to be the shepherds of the new walkable utopia.

Good for them. You could fill (social distancing observed, of course) a giant stadium with planners patting themselves on the back for creating “inclusive places for all.”

I read their lengthy, gushing posts about their human-scaled master plans.

I gaze at dozens of vivid images of people-centric placemaking.

Then my enthusiasm melts to anger. 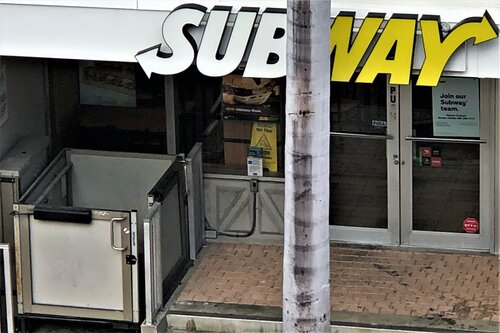 Outdoor lifts are quickly obsolete, often don’t work, and don’t hold up well in the elements.

Both this lift and the one below are broken 90% of the time.

COVID has created this situation as a matter of staying alive.
The reaction to coronavirus has reduced air pollution and emphasized walking, biking and getting around via assistive mobility devices such as wheelchairs and scooters
Posted by Steve Wright Communications, Inc. at 9:00 PM No comments: