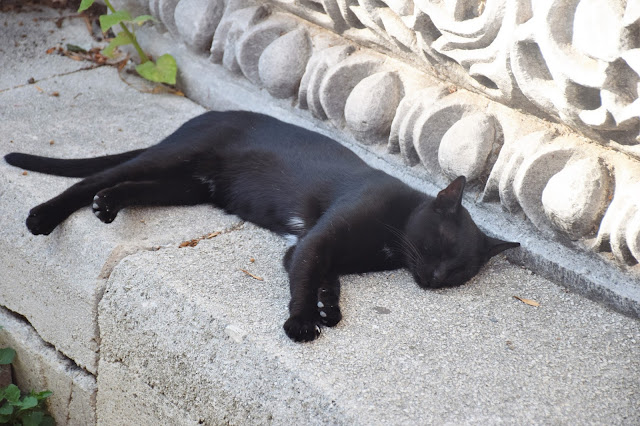 And they deserve our love and special attention on Halloween.

Cartoons and scary stories are fine.

But don't let anyone hurt a black cat. 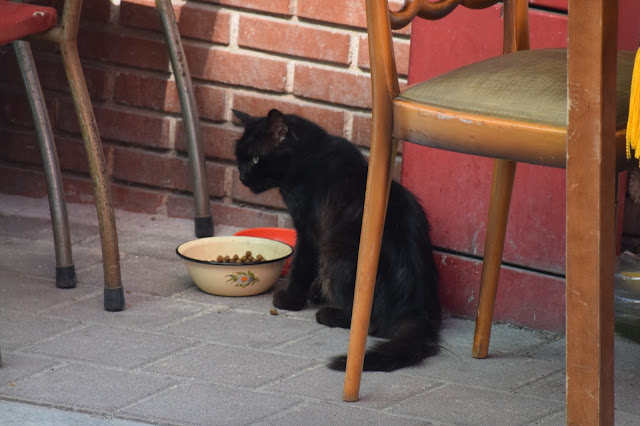 Teach your children to NEVER hurt a poor animal.

Kedi (cats) are revered in Istanbul.

People build shelters for them. 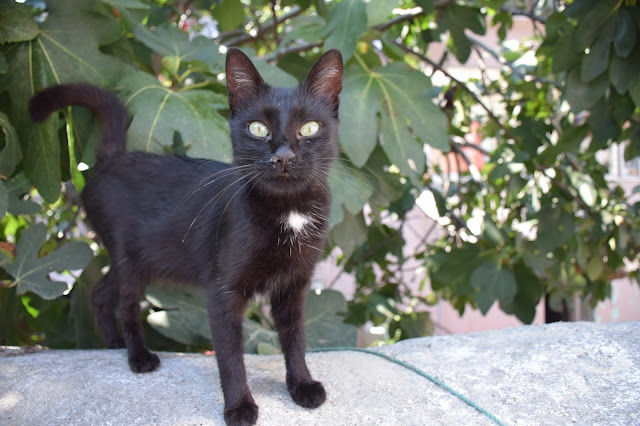 The Kedi come up to you, expecting to be petted.

Turks put out food for them -- everywhere.

We fell in love with the Kedi of Istanbul.

We want to honor them by making sure all of our readers go out of their way to protect black cats on All Hallows Eve.


Posted by Steve Wright Communications, Inc. at 12:00 AM No comments: 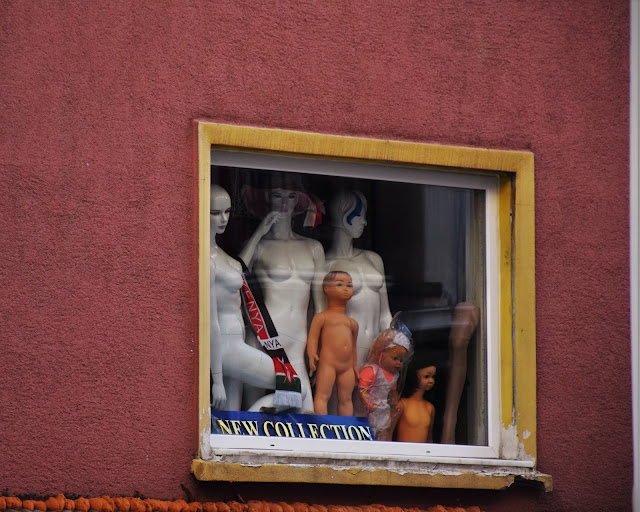 A trip to Istanbul.

To spread the gospel of Universal Design and enhanced wheelchair access to hoteliers and others.

I stayed at a great hotel.

The Hotel Niles is outstanding in every way, except for ADA access.

But it is very quiet there.

It's in a garment district.

So when the sewing machines shut down around 9 p.m., it gets nice and quiet.

The Niles is fairly new, so no sightings of ghosts in the halls.

However, I did have a constant haunting in my dreams.

Not really an ominous haunting.

Kind of a fun, spoken word with clove cigarettes and cheap whiskey session on a cold NE Ohio night type of haunting.

It revolved around naked sirens.

Cherubic figures that would ruin any chances of a the kind of dream that should feature a visit by a trio of sirens.

It wasn't till I got home and started editing the 1,000 digital images that I took each day..

...did I find the inspiration for these dreams that started with heavenly fantasies but always ended with the shaming baby dream police putting the kibosh on.

Posted by Steve Wright Communications, Inc. at 12:00 AM 1 comment: 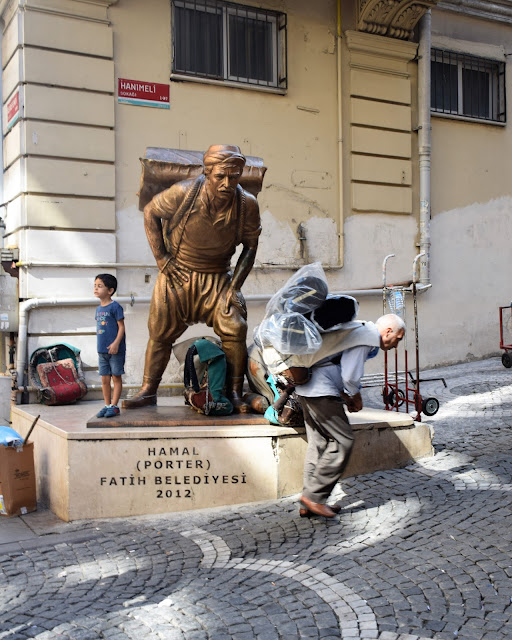 Even in modern times, you cannot walk down a street in Istanbul without seeing a man -- sometimes a man who looks to be into his 60s -- carrying an insane about of wares on his back.

This is the Hamal.

Tom Brosnahan's outstanding book Bright Sun, Strong Tea, chronicles his dealings with Hamals when his goods arrive on the shores of the Bosphorus.

This photo shows a gray-haired Hamal carrying a relatively light load up a steep back street not far from the Spice Bazaar.

These porters work in garment districts and others areas that require large loads to be carried up narrow passageways.

This photo shows a Hamal walking past a statue memorializing the Hamal, erected by the municipality of Fatih. 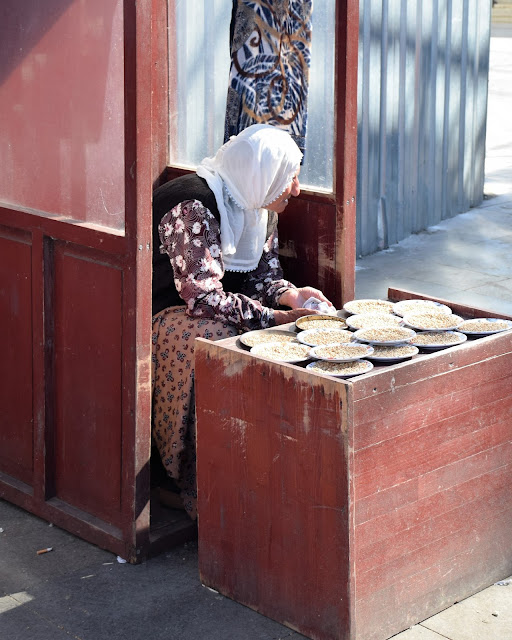 She makes a few Turkish Lira per sale.

Rent in Istanbul has doubled, almost tripled in the past decade.

This lady's stall is in a great location.

Just up the hill from the Eminonu ferry docks.

Very close to the Galata Bridge.

Just outside the New Mosque.

Right on the way to the Egyptian (Spice) Market.

Some neighborhood folks told me she's about 100 years old.

The things she's seen in Istanbul in the past century.

And just how does she make rent?

In a city that is at once rapidly westernizing.

Yet challenged by political leaders who want to introduce religion into the secular republic created by Ataturk. 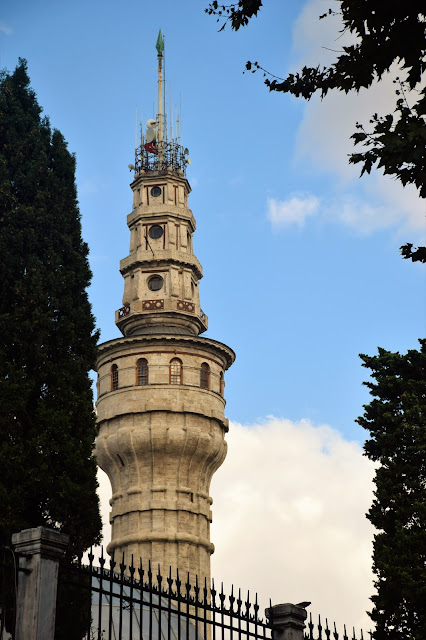 Beyazıt Tower, also named Seraskier Tower, from the name of the Ottoman ministry of War, is an 85 m (279 ft) tall fire-watch tower located in the courtyard of Istanbul University campus (formerly Ottoman Ministry of War.)

Located on Beyazit Square (known as the Forum Tauri in the Roman period), it is on top of one of the "seven hills" which Constantine the Great had built the city, following the model of Rome.

It is currently equipped with lighting system to indicate weather conditions in different colors. 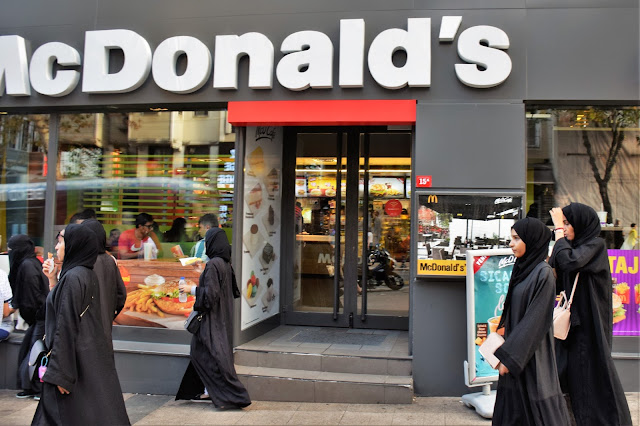 Fatih is one of the most observant areas of old Istanbul.

Women in full Muslim garb is a very common sight.

Fatih also overlaps some of the most popular tourist areas around Sultanahmet Square.

So buildings the surely once housed blacksmiths, tinsmiths, household goods shops and other neighborhood retail have long been converted to host global consumerism.

The juxtaposition of dignified Islamic women.

And the dreaded Golden Arches.

Was too interesting to pass up.
Posted by Steve Wright Communications, Inc. at 12:00 AM No comments:

THE LIGHT OF ISTANBUL 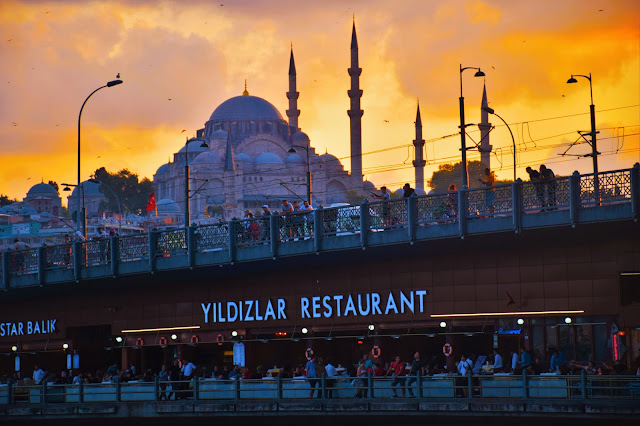 How else do you describe your first day in Istanbul?

You are exhausted from a 12 hour flight in coach...and a 7 hour time difference.

But you walk...from Beyazit to Sultanahmet Square.

You continue past Sirkeci Station -- where the Orient Express used to stop.

You make it to Eminonu and think of Orhan Pamuk's books with chapters that involve the Bosphorus, the Golden Horn and the ferry docks where they meet.

You press on, denying sleep...for a balik ekmek from a gleaming Ottoman-adorned boat.

You board a ferry (you can cross from Europe to Asia for less than 2 bucks U.S. dollars).

You look back at the new Galata Bridge.

The restaurants on the lower lever are tourist traps, but colorful.

The fisherman that line the top level.

Are they there for a fresh balik, or just enjoying one of the world's most magical views in their own hometown?

You hold still, the water is churning like crazy under the hurried ferry to Karikoy.

You gaze up at the New Mosque. Only in Istanbul could something that broke ground more than 400 years ago be considered the "new" thing.

The sun is Halloween orange.

But you are the luckiest person on earth. 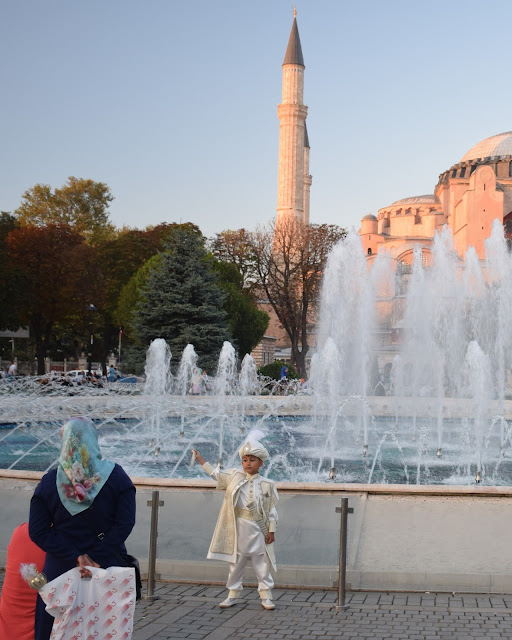 My gracious host Deniz took me from Hotel Niles to Sultanahmet Square.

Posing for family in front of fountain with Ayasofya behind.

Big day for him.

But folks later told me this leads up to a painful slice of surgery done at birth to men in the western world.

Heckuva price to pay for getting to play dress up for the weekend.
Posted by Steve Wright Communications, Inc. at 12:30 AM No comments:

SO I'M IN ISTANBUL, TRYING TO GET A BREATHER
FROM THE U.S. PRESIDENTIAL ELECTION... 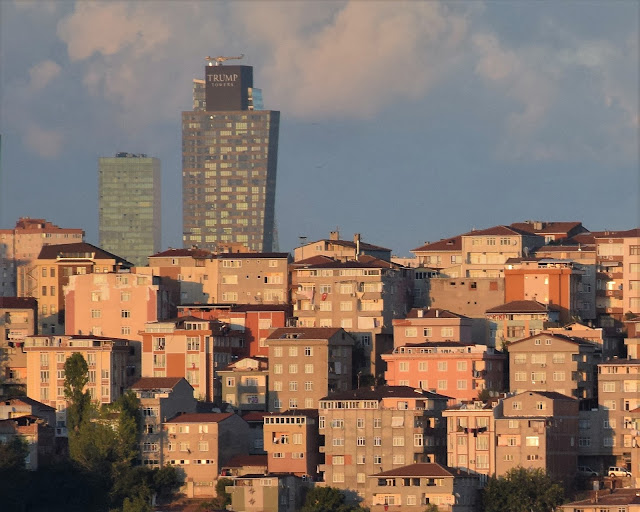 And I'm in Eyup, looking across the magnificent Golden Horn.

Marveling at all the cultural richness in Istanbul.

And there, jarring the historic skyline, I see it.

The guy ruins everything he touches.

Pretty damn galling to earn a hefty licensing fee from you ugly name.

In a city that is probably 90% Muslim.

Guess you can take in their dollars.

But then talk cowboy tough about banning all followers of the Islamic Faith from your Aryan Nation vision of the U.S.

What proof that money doesn't by class or grace or wisdom

Blowhard dictator. Stop barfing your KKK era vision of the past on my great nation.

HAPPY BIRTHDAY TO ME 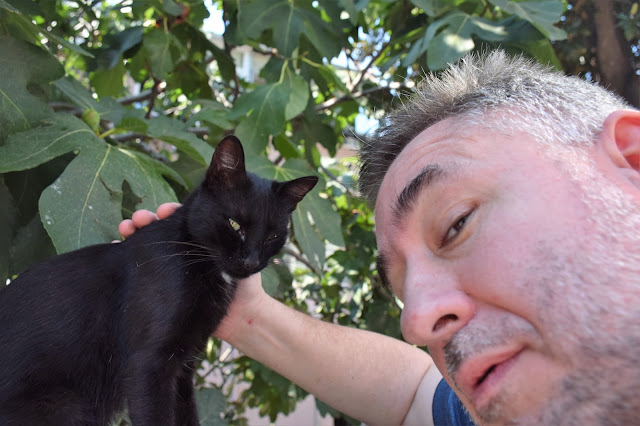 One year walking this earth for every card in the deck.

More than 30 of it spent with my wonderful wife, Heidi.

The past nearly two without my late father, Ken.

Product of small town Midwest, far outside Cleveland and just outside the smokestacks of Akron.

Put half what we paid for it into restoration.

Will be paid off in fewer than 2 years.

Hard wood floors, some in need of carpentry and a refinish.

Good bones, lots of abuse in its nearly hundred years.

Beaten a bit, not unlike my body after its more than half century in the rain, snow, wind and sun.

Would ask for a re-do on anything.

Learned from my mistakes.

Knew when to leave a job when the bosses or owners were toxic.

Reinvented myself at least three times....means prolly a pair of reinventions still on the road ahead.

No desire to live past average life expectancy.

Why be greedy about it.

Have already outlived a lot of classmates and rock stars.

Unafraid of what's on the other side.

For sure, no more bills.

No more Testigos banging on my door to wake me from a Saturday nap.

Until then, lots of rescue cats to take care of.

And blog posts to write. 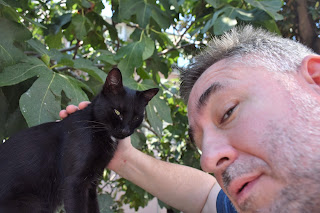 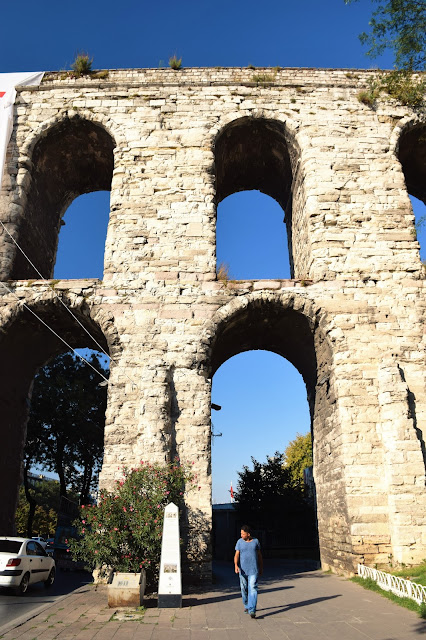 The Valens Aqueduct (Turkish: Bozdoğan Kemeri, meaning "Aqueduct of the Grey Falcon") is a Roman aqueduct.

It was the major water-providing system of the Eastern Roman capital of Constantinople (modern Istanbul, Turkey).

Completed by Roman Emperor Valens in the late 4th century AD, it was maintained and used by the Byzantines and later the Ottomans.

It remains one of the most important landmarks of the city.
Posted by Steve Wright Communications, Inc. at 12:30 AM No comments: