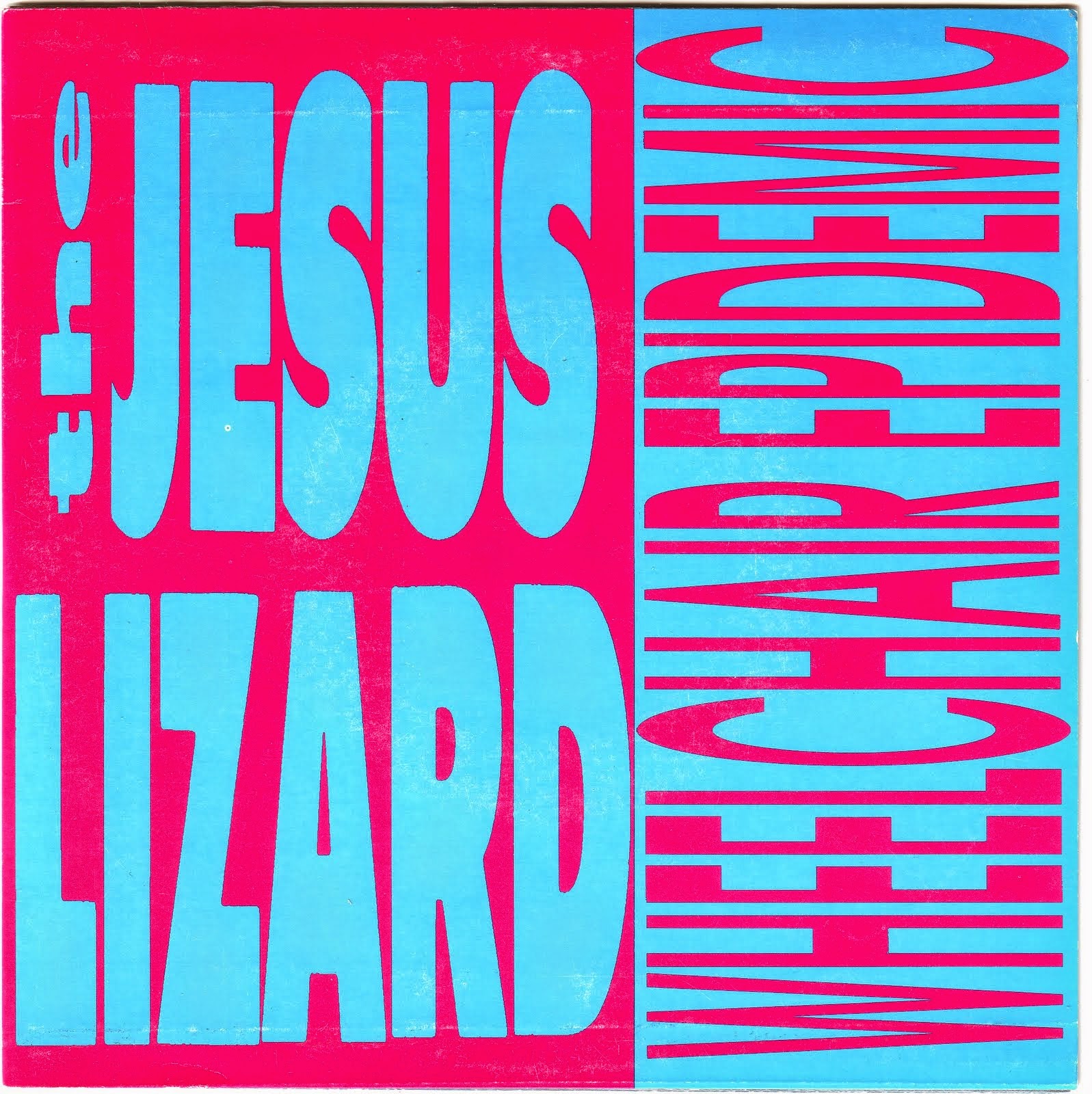 
Some days, I think I need theme music. Not because I’m important or special or deserve attention. In fact, if it were up to me, I’d make my way through the world largely unnoticed.

But because I use a wheelchair for mobility, the world has chosen for me. Often, I get stared at, but that’s a given. What I’m referring to goes beyond that.

Many days, I’ll be rolling down the sidewalk minding my own business, steering plenty clear of pedestrians. Yet someone half a block ahead will see me approaching and yank their child out of my oncoming path. I mean darn near tear the kid’s shoulder out of the socket. Sometimes the sight of the poor little kid flying through the air jolts me so much, I whip around to see if I’ve unknowingly left a row of maimed bodies behind in my wake.

Then there’s the wannabe comedians. You know the guy at the party who keeps repeating the same corny jokes that were only mildly funny the first time he told them? Well, that guy follows me around. I can always pick him out of the crowd by the goofy smile on his face as he sees me approaching. He thinks he’s clever, yet I know exactly what he’s going to say before he says it:

Someday, I’ll get up the courage to holler back:

But perhaps simply broadcasting theme music from my wheelchair as I motor along would be the way to go. So, I’ve been researching songs that might work.

The first one I considered is a song by the noise rock band, The Jesus Lizard, called “Wheelchair Epidemic.” How perfect is that? I mean, it’s got the word “wheelchair” in the title, for Pete’s sake. Plus, it’s got a hard driving beat and true to its guitar-driven pseudo-industrial noise roots, the vocals are nearly indecipherable.

But before I downloaded it and blasted it on my Beats Pill, I thought I should check out the lyrics online. Here’s the first verse:

Then the “hep hep” picks up again and the F bomb is dropped. I didn’t have a problem with the any of that. But then I discovered the second verse includes an ugly homophobic epithet.

No, thank you. Back to the drawing board.

Perhaps I would do better with a song about rolling along, and I immediately thought of Chamillionaire’s “Ridin’”. Who could forget those immortal Southern hip hop lyrics:
“They see me rollin’/They hatin’/Patrolling they tryin’ to catch me ridin’ dirty.”

But then I remembered the song also uses a word, frequently found in rap music, which makes me very uncomfortable.

What about reaching further back into music history for a song with a more subtle message? I racked my brain. The only thing that came to mind was a song written by country and western music legend Mel Tillis, made famous by Kenny Rogers and the First Edition. The song charted number six on the Hot 100 in 1969. Anyone reading this blog remember “Ruby Don't Take Your Love to Town”?

I hadn’t listened to the song in ages, but recalled its indirect reference to the Viet Nam War. That appealed to the Boomer in me. A quick search online revealed that “Ruby” has been covered by many artists, including Waylon Jennings, Roger Miller, Carl Perkins, Cake, The Killers – even actor Leonard Nimoy.

I queued up “Ruby” on Spotify, then it all came rushing back. The song’s about a paralyzed guy in a wheelchair who can’t satisfy his woman, so she steps out on him to get her needs met. Then he fantasizes: “(i)f I could move I'd get my gun/And put her in the ground.”

Yikes. Looks like I’m going to have to write my own dang theme song.

Posted by Steve Wright Communications, Inc. at 11:05 AM No comments: 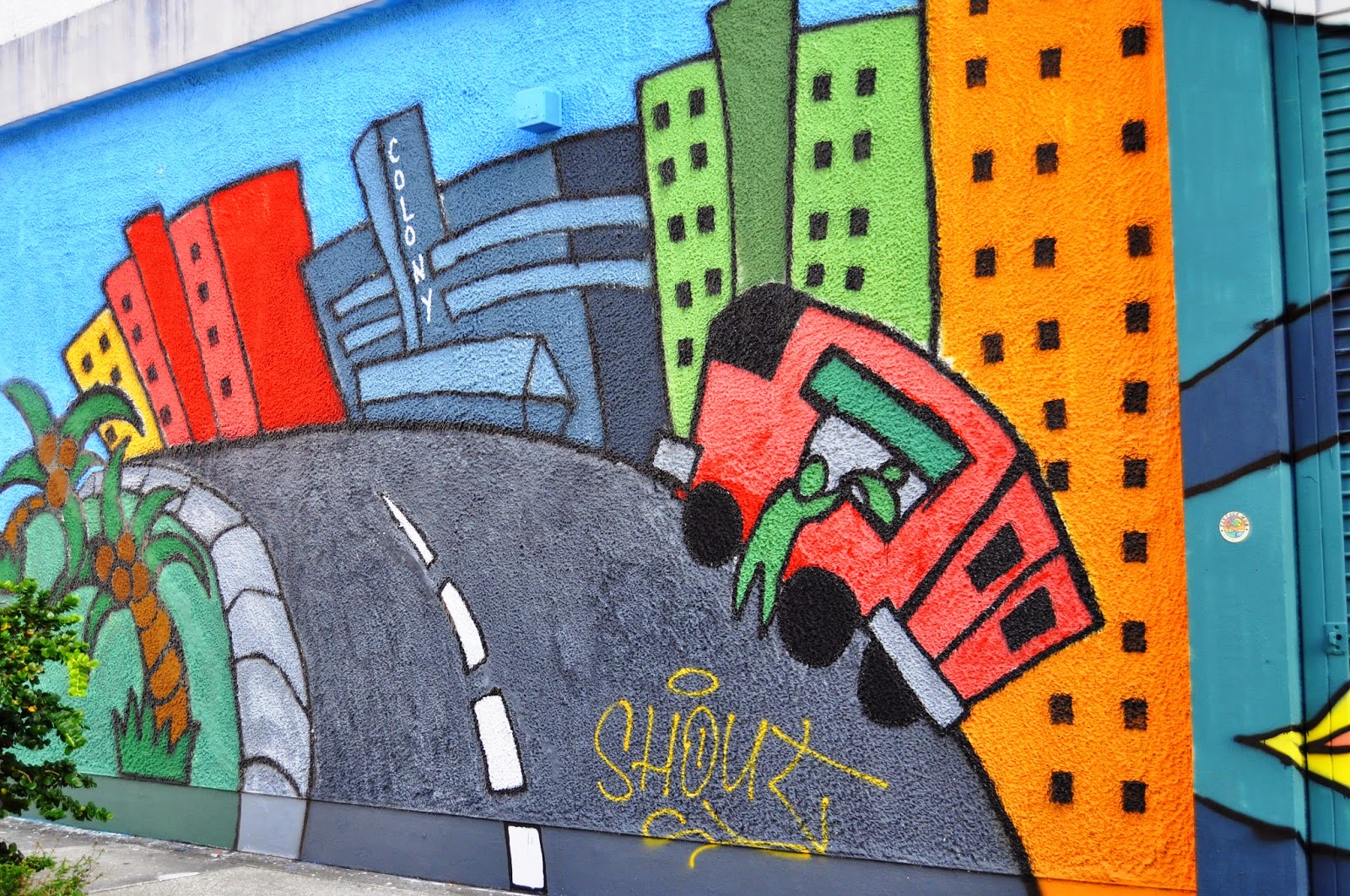 WE HAVE NOW BEEN BLOGGING FOR FIVE YEARS!

Thank you loyal readers for following our stories on urbanism, travel, advocacy for people with disabilities and more.

This blog has earned mentions in major publications and in electronic media.

It has featured more than 1,000 posts -- all original material, no simple pasting in of someone else's words and pawning that off as a meaningful blog post.

In late 2014, Heidi Johnson-Wright joined our stable of writers.

She crated some of the most poignant and humorous posts we've ever read.

Her pieces are lengthy and are some of our most highly-read articles.

We will feature more of her featured blog posts, including excerpts of her upcoming memoir, Earthbound Tomboy.

In the meantime, keep visiting for our future posts on Panama City -- with lots of photos.

Our new friend Roberto Duran will show up in a few posts about hanging out with the champion with Los Manos de Piedra.
Posted by Steve Wright Communications, Inc. at 2:05 PM No comments:

Become Famous! Get Hit by a Car! 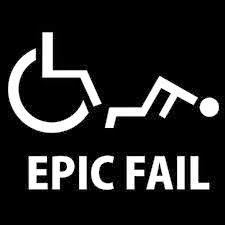 By Heidi Johnson-Wright
About a week before the end of the fifth grade school year, I was hit by a car.

It was a rainy afternoon when the school day ended. I had ridden my banana seat bike to school and would now have to ride home in the rain without a jacket. I would also have to negotiate a line of backed-up traffic. In our bedroom community, nearly every mom was of the stay-at-home variety. Now a legion of them was swarming the school to pick up their kids. To let kids walk home in the rain meant they were in the same “bad mother” category as women who used Hamburger Helper as a crutch instead of making home-made meatloaf.

As I came out of the building my mom was there, with my raincoat in hand. I whined that I wanted her to put my bike in the trunk and drive me home. She insisted I would be fine on my bike, that I needed the exercise and could negotiate the half dozen blocks on my own. She was right, but something made me uneasy. I put on my coat and headed for the bike rack.

One second I was leaning over to unlock my bike, the next I was lying on pavement surrounded by a group of kneeling adults. My eyes slowly began to focus on the faces of my third grade teacher, my fifth grade teacher and my mom. I could hear people crying and sirens wailing. My mind was equally split between panic and “what the hell?”

A mother had jumped the curb with her car and mowed through the school yard. Had she wanted to inflict maximum damage, she couldn’t have picked a better spot: right through a crowd of kids at the bike rack. I had gotten a glancing blow that fractured my leg. When I fell, my head hit the pavement and I received a concussion and the retrograde amnesia that went with it. I was the second worst casualty; another little girl had actually been run over and was in critical condition.

Had I been an average kid, I would have been sent home with a simple cast and crutches and told to use my arms and other leg to get around. But the arthritis's damage to my wrists meant I couldn’t use standard crutches. Nor could my one good leg bear the weight of two. Instead, I went home with a long leg cast with a rubber heel on the bottom and a platform walker without wheels that was so heavy and primitive, it would have been better suited to Herman Munster.

The first two weeks after the accident were a non-stop procession of my parents’ friends dropping by to offer condolences and nights on the couch in agony as my tibia began to knit. By week three, the pain eased and I traded out the long cast for a below-the-knee model. It was then that I began to enjoy my new-found status as a local celebrity.

In my town, the mere possibility of a McDonald’s opening – the only chain fast food joint besides a Dairy Queen -- was cause for controversy and excitement. So it’s not hard to imagine how just being one of those girls that got hit by that car at the school upped my suburban Q score considerably. But this time my notoriety had nothing to do with my arthritis and everything to do with fame earned by mere happenstance. I was "famous" for being famous. Kind of like being a Kardashian.

Friends dropped by my house daily: close friends, casual friends, even long-lost ones. Often they had a card or a small gift, and a story or joke to share. Naturally, they wanted to hear my version of The Accident. Did I see the car flying toward me or hear the engine rev? (No and no.) Did I remember being hit? (No, but I had nightmares about menacing cars.) What was it like to ride in the ambulance? (Claustrophobic.) Did my leg itch inside the cast? (Often.)

An older sister of one of my friends worked as a summer parks employee, teaching arts and crafts to kids. Several times she brought me goodie bags loaded with supplies and trinkets from her class. Though I couldn’t get out of the house to catch butterflies, I enjoyed the treasures she brought. On hot afternoons, I sipped my mom’s sweet tea while I taught myself to make lanyards and drew pastel sketches of fuchsia plants in hanging pots.

My leg healed fine by the end of July, but the weight of the cast and my struggle to walk with it had put a lot of strain on my knee. It swelled to soft ball size and hurt like hell. I lived in daily fear that I would need to have it aspirated, a procedure in which a large needle is inserted deep into the joint and fluid is withdrawn.

I was starting junior high in the fall. Grades six through nine were housed in a building bigger than my old school, which meant a lot more walking between classes. The school was too far away to walk to it, so I’d have to depend on a bus that was supposed to change its route and stop in front of my house. I was nervous about meeting new teachers and kids, brand new people to whom I’d have to explain why I limped or why I sometimes struggled to get up out of a chair.

The richly-symbolic menacing cars and the increasing awareness of my precarious health were always with me, in the back of my mind, as I drifted into sleep on late summer nights while the crickets chirped and the cicadas sang.

Posted by Steve Wright Communications, Inc. at 1:37 PM No comments: 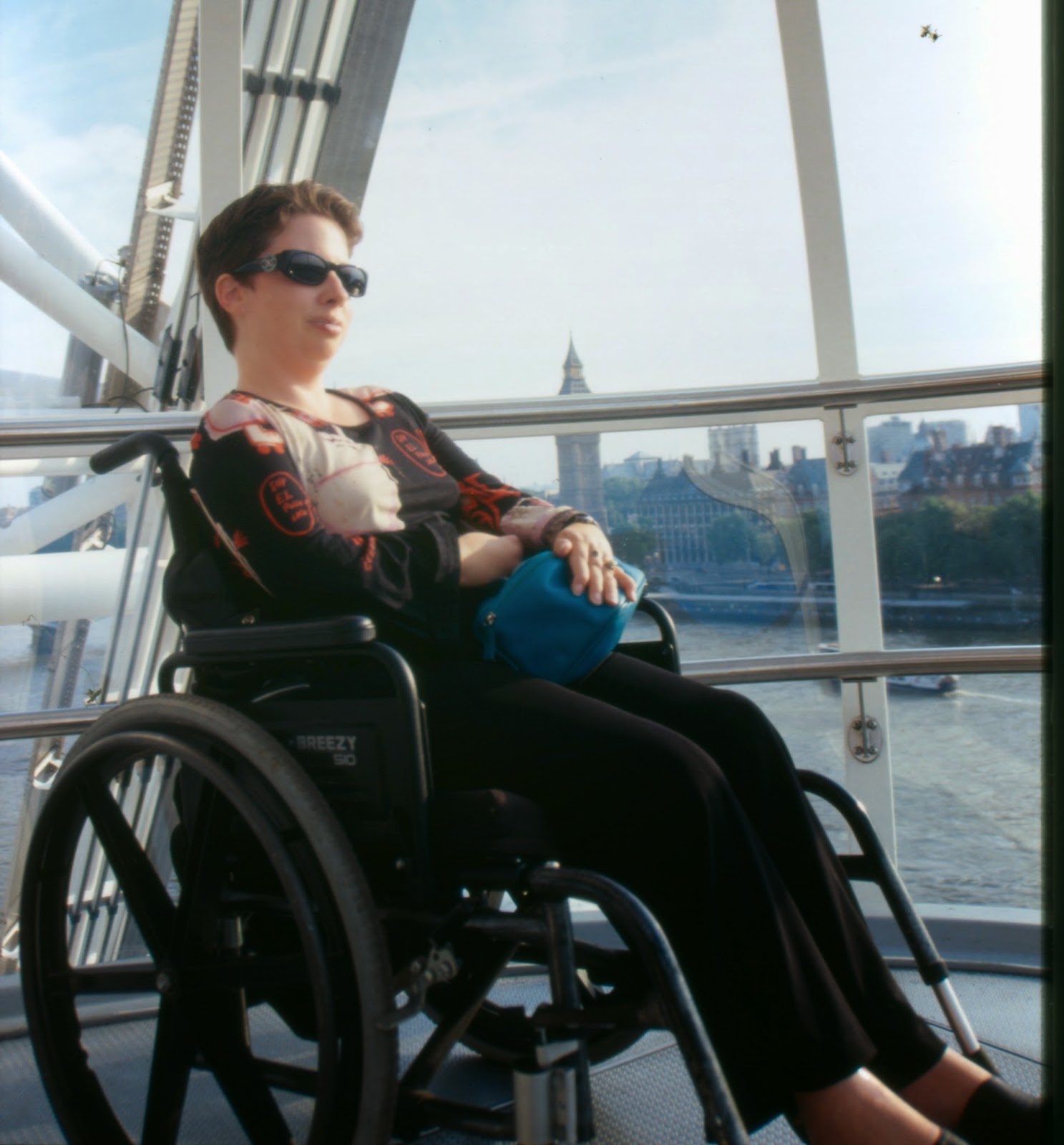 Check out the link below to the excerpt from my forthcoming memoir, The Earthbound Tomboy at New Mobility magazine online. It's about my stint as a poster child for the Arthritis Foundation. New Mobility is the premiere lifestyle magazine for wheelchair users.

Posted by Steve Wright Communications, Inc. at 1:50 PM No comments: