FINDING A WHEELCHAIR-ACCESSIBLE APARTMENT IN BARCELONA 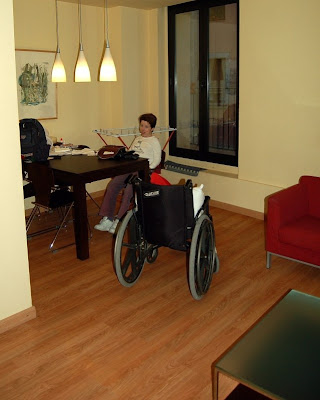 FINDING AN ACCESSIBLE APARTMENT IN BARCELONA (OR ANYWHERE!)

When your spouse uses a wheelchair, your travel options aren’t so much limited as creativity and flexibility dependent.

Long transatlantic flights, for example, are not out of the question. But a wheelchair user with stiff joints, constant pain and prevalent fatigue due to severe rheumatoid arthritis will cope much better with eight-plus hours in a flying tin can if she can be accommodated with the roominess of a business class seat.

The same goes for a place to sleep far from home. It’s not like there are no barrier-free hotels, hostals, palladores or apartments in Spain – it’s just that roughly one in 50 is wheelchair-accessible and about one in 10 of those think to advertise the fact that they can accommodate a disabled traveler.

On top of that, some places somehow come to the conclusion that they are wheelchair-accessible even though the only route to the front door is via eight steep, slippery steps.

Ask any wheeler who has booked a room purely on the inclusion of the little universal wheelchair symbol on a property’s brochure or website, and you will hear a near-horror story of arriving weary from an all-night flight only to find they’ve been assigned to a third floor room in a property without an elevator.

So rather than relying on a vague check mark in the “property is wheelchair-accessible column,” the person planning a trip with a disabled family member is strongly advised to pick several options via websites. That list of allegedly accessible properties is the starting point of a round of phone calls made directly to the property, so the hotelier, landlord, etc. can be grilled through a round of questioning aimed at confirming exactly what kind of barrier-free accommodations are offered.


The intrepid accessibility researcher gets ready to dial, remembering to call early in the morning to reach the manager near the end of his day shift – which is six or more hours ahead of the caller’s time zone. Ring, ring, answer – oops!...just remembered, the answering party is a Spanish speaker. He may have a decent command of English, but very specific and technical questions about wheelchair access may stretch his second language ability.

Again, this doesn’t mean a dead end, it just means the intrepid access researcher must be more creative. Preparing for such a call is an excellent, real world opportunity to practice speaking espaňol before arriving in Espaňa.

If that task is too daunting, use a phrase book to prepare a couple questions and ask the person more than 4,000 miles away for his or her direct email address or fax number. An accessibility needs checklist can be prepared and emailed or faxed.

If all else fails, use one of those free, automatic translators on-line – AltaVista’s Babel Fish will get your words into Spanish, albeit in halting constructions that will make the recipient think he is conversing with a subject-verb agreement challenged kindergartener. Nevertheless, the device works and it can result in some terrific lodging finds.

Armed with information, the next accessibility question is whether to take the ”If it’s Tuesday, this must be Belgium,” different hotel in a different city every night route, or the stay in one place and make it a base of operations route.

When one of the travelers has a disability, the answer is easy. Find one outstanding accommodation and stick with it for the week. Attempting to see the entire Iberian Peninsula in seven days is maddening for any person at any age with even the best of mobility.

The essence of one major city, let alone the attractions within driving distance outside it, cannot be fully experienced in one week. So pick a place that will feel like home and bed down there for the whole semana (week).

The advantage of hotels is the 24-hour availability of the front desk, housekeeping, maintenance and other services. Hostals are cheaper, but accessible ones seem to be rare as hen’s teeth. Spain’s paradores (luxury hotels in converted castles, convents, monasteries and other historic buildings are spectacular, but most are in the country, not the city, and only a fraction are wheelchair-accessible.

To live like a local, nothing beats an apartment. Apartments have character, they offer double or triple the space of the cramped standard room of typical European hotels and they have kitchens for refrigerating, then cooking the bounty found in local markets.

Finding a short-term apartment rental got a whole lot easier once landlords started using internet booking services that make the search so much simpler with location maps, detailed descriptions and multiple angle photographs of the exact unit up for grabs.

Oh Barcelona isn’t the only apartment rental clearinghouse on the Web, but it scores very high points for having lots of vivid pictures, specific information down to the dimensions of a unit and booking agent fluent in English and Spanish, so questions can be volleyed back and forth between landlord and prospective short-term tenant. It also features reviews of the properties in the words of previous tenants. To its credit, the website doesn’t shy away from posting negative reviews along with the positive ones.

Oh Barcelona has listings in virtually every part of the great port city, including the Barri Gotic (Gothic Quarter) with its amazing history and intact structures dating back to the Middle Ages and even Roman period. This dogged detective of disability access found an elevator-equipped apartment just a couple blocks from the heart of the famed Rambla de Sant Josep in the Barri Gotic.

While the unit is perfectly accessible -- the smallish shower is not a modern roll-in model, but it is easier for a disabled person to access than a high-sided tub – it offers better barrier-free surroundings than 95 percent of the lodging options in Barcelona.

The landlord is a very friendly man, but a proud Catalunyan who speaks zero English and actually prefers the local Catalan language to the invading Spanish tongue from the west. Since there’s no front desk, arranging a meeting time to exchange a full cash payment for a set of keys is a little tricky, but not an insurmountable task.

Dealing directly with the landlord was no problem, seeing as how the wheelchair user on this trip is a super brain who speaks Spanish fluently enough to use it as the perfect middle ground language. Signing a brief contract was less worrisome because the apartment owner had used an automatic translator to print out a halting, humorous, but clear enough to comprehend version in English.

The minute the temporary tenants took hold of the keys – and instructions for operating the whacky air conditioner that demands twice-daily emptying of a bucket it drains into – they entered a wonderful world of living like a local. Even that pesky water bucket is on a wonderful balcony that looks over an interior courtyard filled with music, life and the essence of Barcelona’s Gothic Quarter.

Granted, there was no front desk, room service or maid on-call round the clock, but a sterile hotel room wouldn’t have the charm of a long, winding hallway that made the barrier-free apartment feel twice as spacious as it was. And no hotel lined with cookie-cutter rooms would feature the pungent smells of Barcelonans cooking their evening meal when the visitors stepped off the modern, wheelchair-accessible elevator retrofitted into an ancient building.

And thankfully, the long, plenty wide enough for a wheelchair, hallway that passed by two large bedrooms, the bathroom, the full kitchen and living room, put distance between the boisterous taverns of narrow Carrer de la Boqueria and the visitor’s sleeping quarters established in the sunny, air conditioned confines of the generously large and modernly decorated living room.

Not even a standard hotel suite would have such an array of kitchen equipment used to store and prepare local delicacies such as chocolate, café, jamon iberica (thin shaved ham), pan (bread), mermelada de la frambuesa (red raspberry preserves), chorizo (Spanish sausage) and vino rioja crianza (red wine from the Rioja region aged one year in the barrel and one year in the bottle) purchased at nearby markets and shops.

The hunt for a wheelchair-accessible apartment, be it in old Barcelona or any place far from home, can produce an end result filled with unique sights, scents and spaces that simply cannot be found in a soulless hotel room.

With an arsenal filled with planning, perseverance, creativity and a sense of adventure and adaptation, a wheelchair user can win the hunt and savor the flavorful fruit of the pursuit.

Wright frequently writes about wheelchair-accessible travel and has won many awards for covering the subject. He and his wife moved from the Midwest to their favorite vacation place -- Miami’s Little Havana. Contact him at: stevewright64@yahoo.com 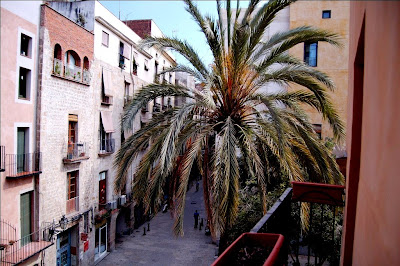 Posted by Steve Wright Communications, Inc. at 7:28 AM